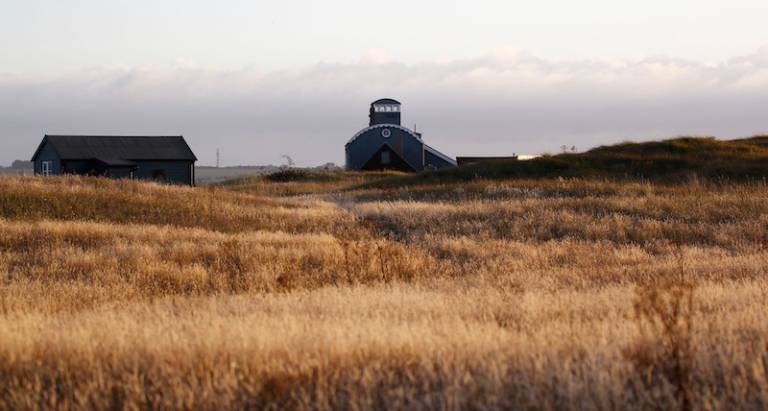 UCL and countless students owe a great debt to Professor Francis Oliver (Quain Professor of Botany, 1888-1929) for his foresight and vision in establishing a field station at the Old Life Boat House at Blakeney Point. It is an ideal location for the study of important coastal habitats, notably shingle ridge, salt marsh and sand dune. Blakeney Point is also home to the largest seal population in England, with over 2,200 common and grey seals.
Oliver remarked that the Point was "long famous for its rare bird life and known to botanists as a locality for rare and interesting shore plants."

Oliver was a keen field ecologist and eminent among the founding fathers of the subject. In particular he was an expert on dune systems and shingle ridges and so the Old Lifeboat House at Blakeney Point was purchased in 1910 and became "the theatre of systematic studies at the hands of organised parties" from UCL (Oliver, 1913).

In 1912 Oliver was instrumental in starting a subscription to buy the point for the National Trust; it was the first national acquisition of such an important coastal site. By 1913 a purpose-built laboratory was established on The Point and the systematic studies continued apace.

As a result, over 20 publications on the ecology of Blakeney Point had been published by Oliver, colleagues and students by 1920. These included work on nesting terns, the local rabbit population; the structure and formation of shingle ridges; and the plants of shingle and salt marsh.

Nowadays, the facility is used for undergraduate and MRes in Ecology field study courses throughout the summer.  It is hoped also that UCL and the National Trust will be able to collaborate with joint field work research on this rare and precious habitat.

Following extensive flood damage caused by a tidal surge in December 2013, the Old Life Boat House and the student bunkhouse (formally the laboratory) were refitted and the decor updated somewhat.

You can find out more about what a field trip to Blakeney Point is like by reading this article about the most recent visit.