Professor Geoffrey Burnstock, head of UCL’s Department of Anatomy and Developmental Biology from 1975 - 1997, passed away on the 2nd June 2020. 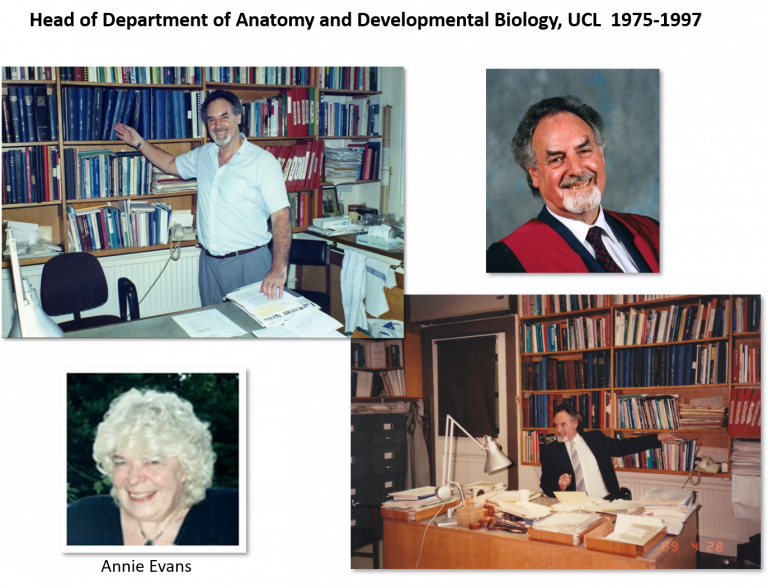 Geoff Burnstock was born in Portobello Road, London in 1929, and grew up locally. A keen boxer and sportsman in his youth, Geoff went up to King’s College in the Strand to study theology, graduating in 1953. He then managed an extraordinary change of direction, commencing a PhD in experimental zoology, studying at Kings and UCL. Geoff’s PhD work on the enteric nervous system in fish, remarkably first published in Nature in 1957, laid the foundation for his future career. It was during this period that he met his wife, Nomi, and longstanding friends and colleagues, Eric Barnard and Lewis Wolpert. Productive fellowships at Mill Hill, Oxford and Illinois followed. It was in Oxford that Geoff adapted the sucrose gap technique to the study of gastrointestinal smooth muscle excitation, laying the groundwork for his grand opus - the inhibitory transmitters of the gut. In Illinois, Geoff studied under Ladd Prosser as a Rockefeller Fellow to refine his understanding of smooth muscle electrophysiology and synaptic transmission.

In 1959 Geoff was appointed senior lecturer in the Zoology Department in Melbourne, working alongside Mollie Holman and Max Bennett on excitatory and inhibitory junction potentials of gut smooth muscle. By 1964 Geoff had achieved promotion to Professor and Chairman of the department. It was in Melbourne that Geoff developed his then contentious but seminal ideas about ATP as a neurotransmitter, assisted by the highly capable Graeme Campbell, resulting in the publication of Geoff’s landmark 1970 paper. It was the topic he was to pioneer passionately over the next few decades, leading in 1993 to the cloning of the first G protein-coupled ATP receptor (P2Y) in the brain with Eric Barnard, Trevor Smart and Brian King.

In 1975, Geoff was appointed as the new head of the Department of Anatomy and Embryology, succeeding Professor JZ Young.  It is safe to say that the appointment of a scientist with a controversial background in physiology and pharmacology to the senior chair of Anatomy in the UK ruffled a few feathers, although Geoff received the full support of James Black (then Head of Pharmacology at UCL, and later Nobel Prize winner) who openly admired Geoff’s passion for research.

Over the next 23 years Geoff showed himself to be an outstanding leader and administrator. He diversified an already diverse department, notably increasing the number of women on the academic staff. Research fields included many aspects of neuroscience, pharmacology, anatomy, comparative physiology, developmental biology, stem cells, human and reptile evolution, bones, teeth, robots, radical microscopy, olfaction and the history of medicine. Seven members of the department were elected to the Royal Society and work was done that led to two Nobel prizes. Geoff also expanded the number of professors in his department from 3 to 26, in recognition of their ground-breaking research.

Geoff’s personal style was enthusiastic and positive. He was an astute, intuitive judge of science and people. He wasn’t a snob in any way.  These qualities were tempered by an occasional hint of menace (Lewis Wolpert once likened him to a mafia boss!) - but he was helpful and generous to his staff. Although money was often tight during his years at the helm, he could usually manage to find a few hundred pounds towards a DIY lab refurbishment or upgrading some piece of equipment. Geoff liked to say ‘yes’.  He didn’t mind what people did, as long as it was interesting - and successful. Geoff understood the need for the head of department to be present and visible. His office was strategically placed, and the outer door was almost always open; he usually managed to put in an appearance for coffee at 11 am every day, if only for a few minutes. Although he never really used computers, he was famously quick to reply to letters or emails, helped by his superb PA, Annie Evans, who was able to read Geoff’s handwriting (and also understand his special code involving the four different coloured biros). They made a formidable team.

As for Geoff’s science, it took a while before his heretical ideas about nucleotides as extracellular signalling molecules started to become respectable outside of Australia. In 1985, he took over the reins from Chandler Brooks as Editor in Chief of the Journal of the Autonomic Nervous System (remaining until 2016). By the 1990s, the ubiquitous nature of ‘purinergic’ signalling was clear, and Geoff Burnstock became one of the world’s most highly cited pharmacologists. He was elected FRS in 1986 and got the Society’s Royal Medal 14 years later (together with Tim Berners-Lee, co-inventor of the internet); he was awarded the British Pharmacological Society’s Gaddum Medal in 2010. In 2004, Geoff helped launch the brand-new journal, Purinergic Signalling, as a dedicated platform for authoritative research on nucleotide-based cell biology and experimental medicine. After stepping down as HoD at the age of 68, Geoff set up the Autonomic Neuroscience Institute at the Royal Free Hospital, where he continued his hugely influential work for another 20 years. He moved back to Melbourne in 2017, receiving the Australian Academy of Science's Macfarlane Burnet Medal in the same year. In the Queen’s 2018 Birthday Honours List, Geoff was made Companion of the Order of Australia, the country’s highest honour.