Dr Seirian Sumner and her team in the Research Department of Genetics, Evolution and Environment have launched an on-line game to build love and understanding of wasps and encourage them not to swat them. 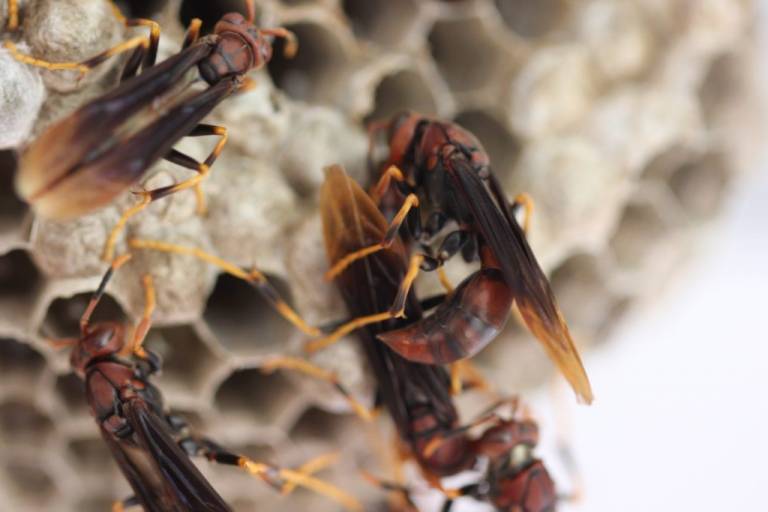 Launched at the end of January, you can click here to get started…http://wasplove.com/ and build your own wasp society, learning about how wasps form complex social groups.

Developed in conjunction with FoAM and funded by the Natural Environment Research Council, #Wasplove, is a new interactive game that sees the player compete as a wasp.  Gamers are challenged to build their own nest and grow a colony in the face of unexpected hazards.  Once you have a big enough colony, you’ll get the option to lay eggs that turn into reproductive wasps.  Make sure you disperse these special reproductive wasps in winter so they can find a mate and start their own colonies!  The game is based on the ‘European paper wasp’ using scientific research that has helped us understand the complex social lives of these fascinating insects.

Players take on the persona of the ‘European paper wasp’, making life choices about building nests, how to allocate colony members to different jobs, and balancing the tasks of bringing in food, brood production and care. When environmental catastrophes hit, parasites arrive, or humans put the wasps at risk, the resilience of the colony is tested.  Players compete with others as they move up the leaderboard.

Dr Sumner has conducted extensive research into wasps and their relationship with people, such as a study finding that a lack of understanding of the important role of wasps in the ecosystem and economy is a fundamental reason why so many people dislike them, and another study finding that wasps could potentially help farmers with pest control.

Dr Sumner has also published an article aimed at 12 to 15 year-olds, which talks about her work on wasps in an accessible way, and about why we should care about wasps and not just swat them away.

Dr Sumner commented, ‘With the #Wasplove game and my article we are developing new ways to engage the next generation with unloved animals like wasps and show them the important role these creatures play in the planet’s ecosystems.’