I first got into science when I read the biographies of various scientists including William Harvey and Marie Curie aged 14 when living in Zanzibar. After my undergraduate studies at the University at Manchester, I went to Birmingham University for my PhD where, through Bob Michell, I was introduced to a novel class of lipids, the phosphoinositides, that might play a big role in signal transduction. 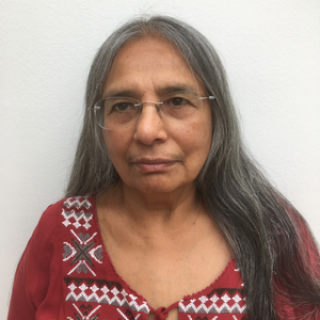 This got me hooked and I was fortunate to find a lab at UCL where I could pursue my interest in these lipids as a postdoctoral fellow. I was subsequently awarded a Fellowship from the Lister Institute and remained at UCL. I joined the Department of Physiology at UCL in 1989 and established the Lipid Signalling Group.

What research finding(s) and publications are you most proud of?

1. A serendipitous observation led me to identify that externally added ATP led to a gradual formation of an increasingly larger ion pore. We now know that this receptor (P2X7) has widespread significance in inflammatory diseases and is also an emerging target in central nervous system diseases (Cockcroft & Gomperts, 1979).

2. The discovery that phospholipase C activation was regulated by G-proteins (Cockcroft & Gomperts, 1985), subsequently purified and named as the Gq family.

3. The discovery that exocytic secretion was regulated by Gproteins (Cockcroft et al. 1987).

4. The discovery that lipid transfer proteins were required for phospholipase C signalling for the supply of substrate (Thomas et al. 1993).

What significant challenges have you overcome?

My major challenge was to go to University. I was born in Zanzibar and grew up amidst the many charms of its old town and its beautiful coastline. One month after independence from Britain, in January 1964, a socialist revolution transformed society. I was 12 years old. I quietly ‘escaped’ to the mainland of Tanzania when I was 17.

I was fortunate to find support from the headmistress of a convent school in Harrow who allowed me to do my A levels in physics, chemistry and maths. After obtaining my A level results in August, a family friend, who was doing his PhD in Manchester negotiated a place for me in Manchester University to study Biological Chemistry.

As luck would have it, the government then introduced higher fees for overseas students and at the same time my family were unable to fund my education due to foreign exchange regulations introduced in Tanzania at that time. Regardless of this, I survived the three years at university and was able to obtain several small grants from educational charities as well as working during the holiday period. As an overseas student, I had a limited choice for my PhD. Birmingham University offered me a demonstratorship and this allowed me to study with Bob Michell.

Go where the science takes you and follow those leads that take you into new territories.

"Biology of Phosphoinositides is a review of current lipid signalling research with emphasis on the integration of the use of lipid signals in signal transduction and membrane trafficking. These two areas have traditionally been seen as separate but now anyone ignoring one area at the expense of the other does so at their peril." 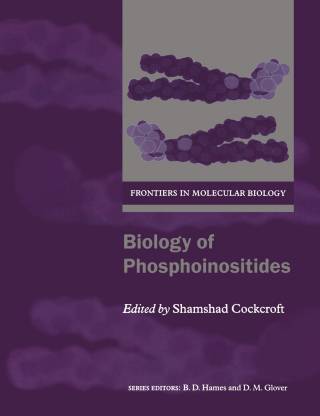 "The regulation of phospholipase C (and its isozymes), phospholipase D, the phosphoinositide 3-kinases, chloride channel conductance by inositol (3,4,5,6) tetraphosphate, and of cytoskeletal protein activity by inositol lipids are all covered in depth. There is specific discussion of the PH and FVYE lipid binding domains that allow lipids to control the movement, location, and activation-state of membrane proteins. The central issue of the control of synthesis, translocation, and degradation of phosphoinositides is also given due coverage."

"The central role of lipids in cell function is now widely acknowledged. Biology of phosphoinositides serves both as an intriguing introduction to what these molecules can achieve, as well as update on current research finding for existing afficionados." 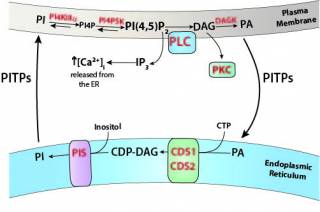