Serial killers of the immune system caught on microscopic CCTV

Our life hinges on an army of serial killers that attack virus-infected and cancerous cells in our body, a type of white blood cell called cytotoxic lymphocytes, which show remarkable efficiency in first perforating their victims and next injecting poisonous enzymes. 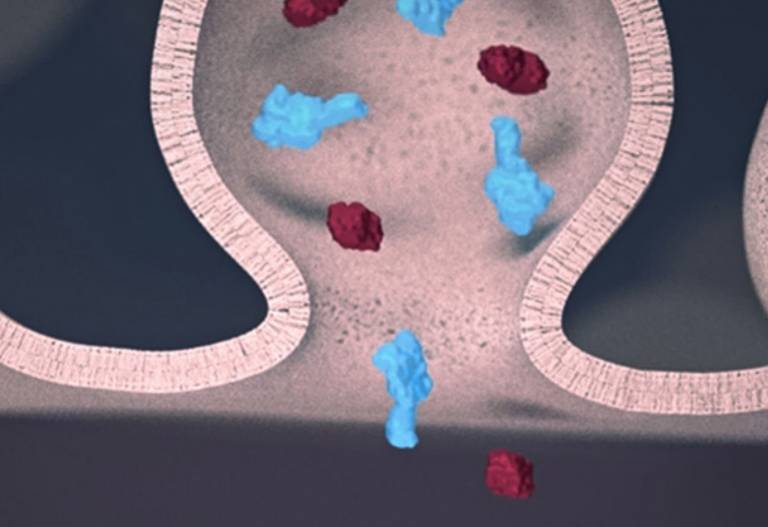 Artist’s impression of perforin (here shown blue) in the immune synapse between a natural killer cell and a target cell, with perforin drilling holes that facilitate the entry of poisonous enzymes (so called granzymes, here shown Bordeaux red)

Our life hinges on an army of serial killers that attack virus-infected and cancerous cells in our body. These killers are a type of white blood cell called cytotoxic lymphocytes, which show remarkable efficiency in first perforating their victims and next injecting poisonous enzymes. As reported in the journal Nature Nanotechnology today, scientists at the London Centre for Nanotechnology have filmed the process by which lymphocytes drill holes in their victims, laying bare key steps taken by the immune system to rid our body of harmful invaders.

In a collective effort by teams at University College London (UCL) and Birkbeck, University of London, as well as at the Peter MacCallum Cancer Centre and Monash University in Melbourne, the scientists focused on the protein perforin. Perforin is released by cytotoxic lymphocytes and next binds to the protective membrane that surrounds target cells. After binding, it self-assembles into ring-like structures. These structures each contain multiple perforin molecules that together perforate the target, leaving holes of a few tens of nanometres diameter.

To film perforin in action, the scientists used a microscopic version of CCTV, so called atomic force microscopy, in Bart Hoogenboom’s lab at the LCN. This type of microscopy uses an ultrafine needle to feel rather than see perforin on a target membrane, in a similar way as a blind person reading Braille. The needle repeatedly scans the surface to produce an image that refreshes fast enough to track how perforin molecules get together and cut holes in the membrane. Initially, perforin appeared as a blur on these images. However, once a few perforin molecules together inserted into the membrane, they could be more clearly identified and shown to recruit more perforin to thus growing transmembrane pores.

By also recording static snapshots at higher spatial resolution by electron microscopy, Helen Saibil’s team at Birkbeck succeeded in estimating the number of molecules per perforin assembly at the different stages of the process, confirming a change from loosely packed small perforin assemblies on the membrane to larger and more tightly bound transmembrane pores.

At the Peter MacCallum Cancer Centre in Melbourne, co-author Ilia Voskoboinik highlights the medical importance of the results: “To kill virus-infected or cancerous cells, perforin must be quick and efficient, as achieved by the mechanism disclosed here. Patients born without functional perforin may present with fatal failure of the immune system and also have a higher risk of developing blood cancers.” Ilia’s lab also performed experiments with lymphocytes that contained partially active perforin – variants such as those found in patients with the fatal human hyperinflammatory disease FHL. The results were consistent with the microscopic data obtained in London, and interestingly show that perforin pore formation overall is greatly hampered even if only a subpopulation of the perforin molecules are abnormal.

With several stages of perforin pore formation now discovered, the next step will be to determine the corresponding molecular structures, which may then serve as targets for therapies that enhance or suppress the immune system as appropriate.