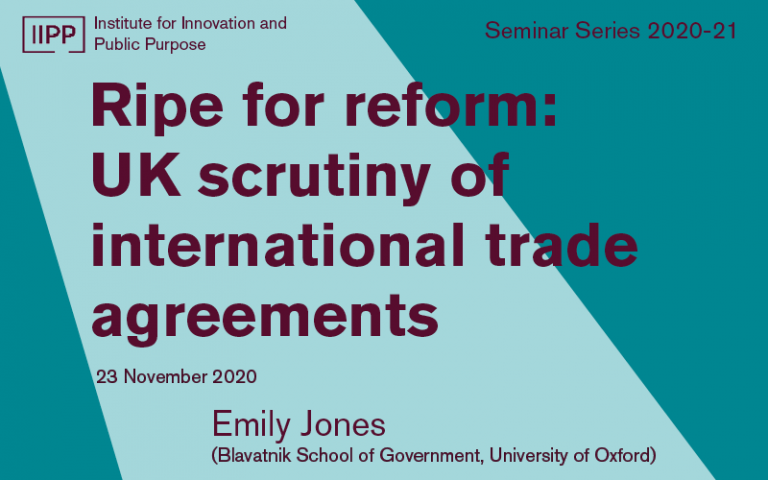 Join us for this talk as part of the IIPP Seminar Series, as Emily Jones (Blavatnik School of Government, University of Oxford) discusses her research and her working paper on the UK’s scrutiny of international trade agreements.

Now that the UK has left the EU, the UK government is negotiating trade agreements for the first time in almost 50 years. Contemporary trade agreements have far-reaching policy implications, yet the UK Parliament has few scrutiny powers. Unless changes are made, the UK’s future trade deals will receive less scrutiny than the trade deals the UK entered as a member of the EU.

Emily Jones will present new research that systematically compares parliamentary scrutiny of trade agreements in the UK, United States, European Union, Australia, and Canada. She will explain how and why the US Congress and European Parliament have extensive scrutiny powers, and will contrast these with the much weaker powers of the Westminster-style parliaments of the UK, Australia and Canada. She will examine the extent to which governments involve sub-national governments in negotiations, a pressing issue in the UK. She will also evaluate the arguments for and against greater scrutiny, and identify lessons that the UK can learn from other jurisdictions.

Blog post: Parliamentary Scrutiny of Trade Deals: How does the UK Measure Up? by Emily Jones and Anna Sands.

Associate Professor at Blavatnik School of Government, University of Oxford 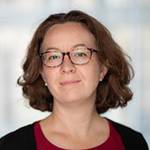 Emily Jones is an Associate Professor in Public Policy at the Blavatnik School of Government, and a Fellow of University College. She directs the Global Economic Governance Programme which fosters research and debate on how to make the global economy inclusive and sustainable. Emily’s research examines the political economy of global trade and finance, focusing on the ways in which governments can exert influence in asymmetric negotiations. Emily teaches courses on international political economy and negotiation strategy and skills for public policy, specialising in international trade.