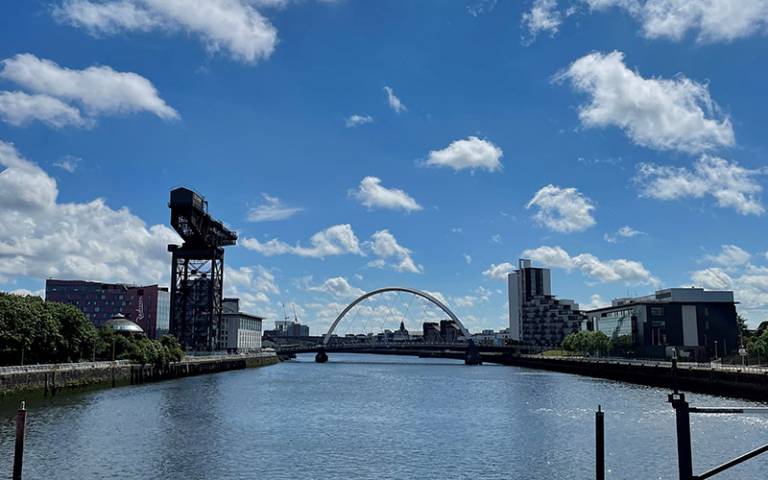 Figure 1: The River Clyde has historically been a key driver of economic growth in Scotland. The Clyde Mission will make use of derelict land and protect communities from the impacts of climate change.

What is the Clyde Mission and what are the drivers of this case study?

Historically, the River Clyde has been a key driver of economic growth for Scotland. Today, however, its banks are scattered with vacant and derelict land, and its communities are facing the rising tides of climate change. With the growing recognition that these communities were in need of regeneration, and with the determined vision set out by then Cabinet Secretary, the Clyde Mission was established: a national, place-based mission to make the Clyde an engine of sustainable and inclusive growth for the Glasgow region and for Scotland.

What approach did the Clyde Mission take?

The Clyde Mission has cultivated a clear, long-term direction for change, in the service of which markets and solutions are being co-shaped and co-created. Using the Clyde Mission Fund, the Scottish Government is working with and financially supporting Clydeside communities to navigate the dynamic, unpredictable, and long-term societal challenges of inequality, deprivation, and climate change.

What is the context for the Clyde Mission?

The Clyde has been - and continues to be - a mainstay in Glasgow and Scotland’s industrial and economic development. In the 1920s and 1930s, a quarter of all British ships were built on the Clyde, supporting the region’s and the Empire’s economic prosperity. As of early 2020, still more than 170,000 people lived in the area just 500 meters on either side of the river and there are over 8,000 companies supporting around 138,000 jobs, which represents no less than 5% of Scotland’s entire labour force. Climate change, however, is beginning to impact these communities. A technical report from Climate Ready Clyde in 2018 identifies coastal flooding and erosion, damage to infrastructure due to storms and extreme heat, and a depleting soil stock among the most prescient risks to the region.

What is more, some Clyde communities are subject to high proportions of deprivation. Indeed around a fourth of the local population live within the 15% most deprived areas in Scotland. All the while, regions near the Clyde are severely under-utilized and there are over 250 sites of vacant and derelict land covering over 400 hectares. These high levels of deprivation coupled with lots of vacant land highlight an exciting opportunity for rejuvenation and regeneration. To take advantage of this opportunity, the Scottish Government launched Clyde Mission.

What was the approach to Mission-Oriented Innovation?

Adopting a mission-oriented approach for the Clyde region was very much a top-down affair. In 2019, Richard Rollison created the Division within the Scottish Government’s Directorate for Economic Development (DED), and championed a missions approach which saw the rejuvenation of Clyde-side communities as a strategic objective, collecting high-level political buy-in from ministers and regional authorities. The then-Cabinet Secretary (there have since been Ministerial moves, and an election) agreed on the grand challenge of

Making the Clyde an engine of sustainable and inclusive growth for the city, the region, and for Scotland.

While the direction-setting was top-down, defining the missions was a participative process. Through workshops with multiple stakeholders, including local authorities, third sector interfaces, businesses, and academics, five mission areas were articulated: 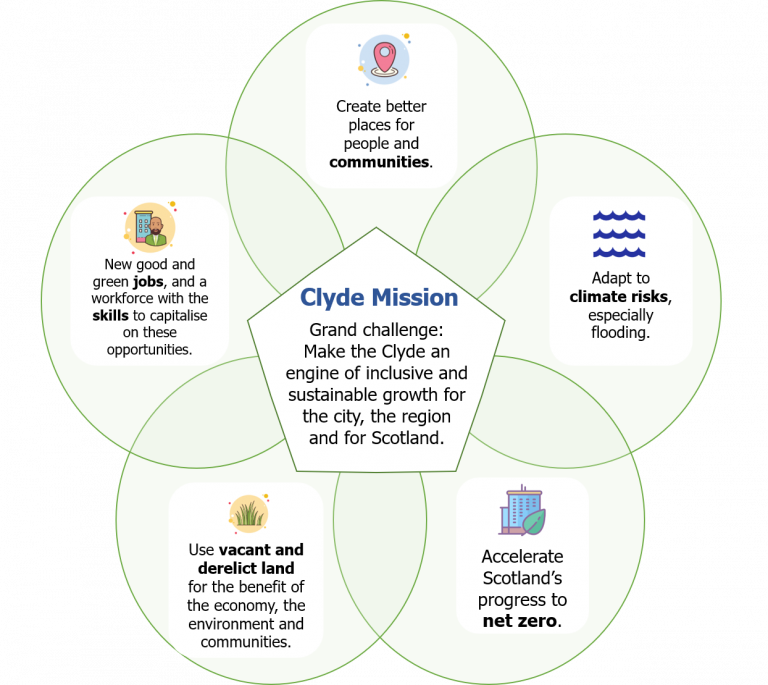 Responding to the pandemic, the team were able to secure over £11 million of capital funding to help act as an economic stimulus for the area. The team sought to support the economy of the area, and make strides in supporting their missions by creating a Clyde Mission Fund. The Clyde Mission Fund was launched in November 2020 with the aim of supporting capital projects that would deliver economic stimulus and jobs to communities within 500 meters on either side of the Clyde. Importantly, conditions were set on the funding, with projects having to support key Scottish Government outcomes as defined in the National Performance Framework.

A panel of experts, including representatives from a number of different bodies, such as the Scottish Futures Trust, Scottish Enterprise, and Clyde Mission, evaluated the funding proposals and by March 2021 had secured additional funding, taking the total to over £13 million, and distributed funding to 13 specific projects (see Solution section). What is more, the Mission team worked closely with the different projects to co-shape their direction so as to align with one or more of the five missions, as well as with other key policy areas such as Community Wealth Building.

What solutions are emerging from the missions approach?

Though each of the 13 projects aligned with the Clyde-based missions, one stands out in particular: the Scottish Marine Technology Park in West Dunbartonshire Council. Lying northwest of Glasgow. The Council is working with a private sector partner (Malin Marine), using  £1,980,000 in funding, to support the development of the Scottish Marine Technology Park (SMTP) which will regenerate a contaminated area of vacant land to build infrastructure and support the region’s maritime community. Not only does this initiative take advantage of unused derelict land, it also supports local residents by offering high-paying engineering jobs; with the site owners actively reaching out to local communities to generate interest in these high value careers. Moreover, investing in these formerly vacant areas increases the likelihood for other plots of land in the region to be developed, representing a “first domino” of sorts. With the mission to “innovatively create new sustainable high quality, green jobs in the Scottish Maritime Manufacturing and Technology Sector and deliver wealth creation into the local communities of the Clyde.”, the park will place particular focus on green technologies both for the shipping and energy markets. 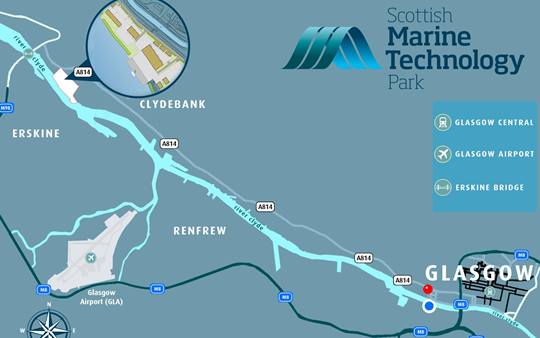 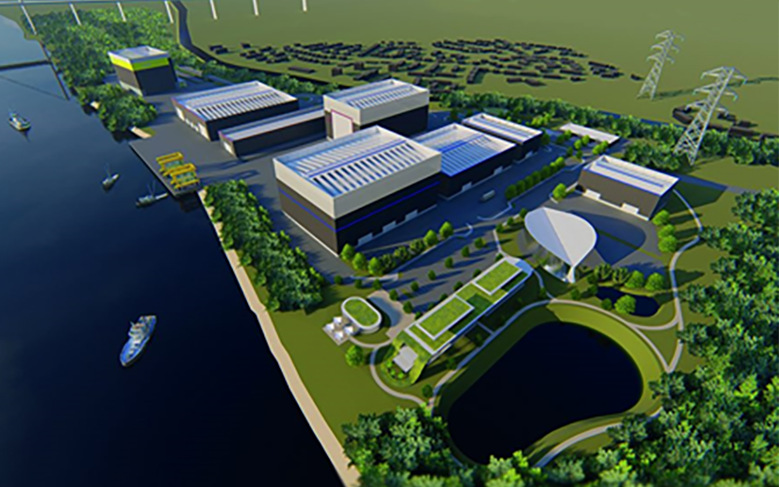 Figure 2: The Scottish Marine Technology Park (SMTP) lies northwest from Glasgow, up the River Clyde. The Clyde Mission team hopes the establishment of the SMTP can have a domino effect in the area.

It is expected that the projects that are being financed by the Clyde Mission Fund will support the creation of 386 jobs in the short term, and more than 500 jobs and 29 apprenticeships in the longer term. Furthermore, it is anticipated that these projects will unlock additional investment of over £14.5 million, suggesting that the Clyde Mission has already begun to crowd in investment to the Clydeside.

What challenges does the Clyde Mission face?

There are a number of challenges the Clyde Mission will have to consider going forward. Firstly, aligning the Clyde Mission and its future areas of work with existing structures (such as a Regional Economic Partnership in Glasgow City Region), while not being subsumed by them, will be crucial. Secondly, the cross-sectoral and challenge-driven focus of the Clyde Mission means their work does not align with existing evaluation methods and metrics, requiring the team to develop tailored and bespoke measurement collections. Lastly, the regions flanking the Clyde are deeply diverse and characterised by different communities and dynamics. This means the Clyde Mission’s projects and initiatives must engage with the diversity and complexity of the specific areas.

The Clyde Mission Fund is, however, just part of the story. The team work intensively with partners and have also commissioned bespoke research into opportunities around maritime engineering, the innovative use of vacant and derelict land, and an energy masterplan (with funded feasibility studies) to support low carbon energy solutions, as well as conducting a public Call for Ideas to engage the wider community in designing the future of the region. In June 2021 a high-level Strategy Board is being set up, alongside five mission sub-groups, which will govern the respective mission areas. Much is to be expected from the Clyde Mission in the coming years.

What have the Clyde Mission’s Team learned?