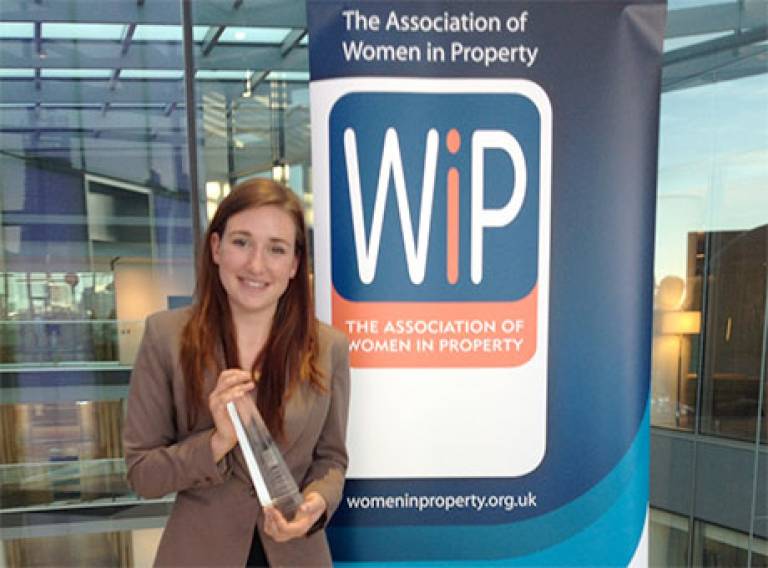 Lucy Godwin, an undergraduate student at The Bartlett School of Planning, has been named as one of the top property students in the country in a national property industry competition, the Association of Women in Property (WiP) National Student Awards. Lucy has managed to secure one of three top awards and will now represent the South East region in the National Final. If successful in the final Lucy will go on to win a further prize of £700 and a year's membership of Women in Property.

The National Student Awards encourage entries from second year, female students studying a Built Environment degree course. They are nominated by their University, ensuring that only the cream of the crop make it this far. This years judging panel comprised key industry professionals from companies such as Coutts, Sainsbury’s and WSP, to name a few. The Awards recognise potential at a very early stage in the education and training process and helps to establish a vital link between higher education and industry.

Lucy, a student on the BSc Urban Planning, Design & Management, won £300 together with ongoing support from the Women in Property network. She will also have the opportunity to gain work experience and participation in the WiP mentoring programme whereby a mentor will support her in her early career. She said, “I was really pleased to be put forward for this Award by my tutor but I’m absolutely amazed to have won! I know how tough the competition was so I’m thrilled that the judges chose me for one of the top prizes.”

The National Final will take place in Claridge's hotel in London on 17th September 2013.