The Bartlett Professor of Urban Regeneration and Planning, Professor Sir Peter Hall was honoured on 20 September 2013 with the LEAF Lifetime Achievement Award. 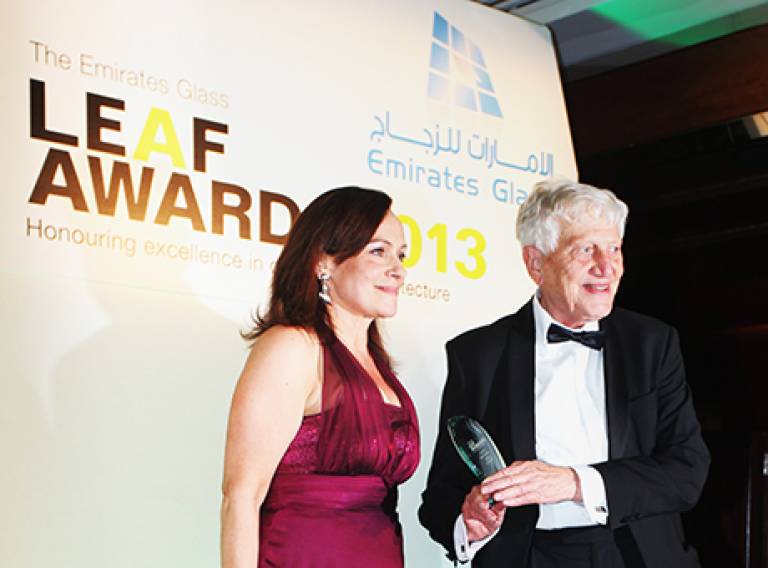 Now in their tenth year, the Emirates Glass LEAF Awards celebrate the best of global architecture, and highlight the achievements of the architects and planners who are creating built environment solutions around the world.

A member of The Bartlett for over twenty-five years, Peter Hall was knighted in 1998 for his services to the Town and Country Planning Association and was named as a ‘Pioneer in the Life of the Nation’ by the Queen in 2003. In the past fifteen years, he has also received a number of prestigious awards, including the Gold Medal of the Royal Town Planning Institute, and in 2005 was awarded a Lifetime Achievement Award for his contributions to urban regeneration and planning by the then Chancellor, Gordon Brown.

He writes regularly on this topic, and has recently contributed to the often controversial debate into the proposed development HS2 in England.

This month also saw Professor Hall named as an Academician of the Academy of Social Sciences, alongside his colleague from the School of Planning, Professor Matthew Carmona. Professors Hall and Carmona are two of the three UCL academics to receive the title from a list of 51 recipients.