Some thoughts on the future of the motorcar and its manufacturers 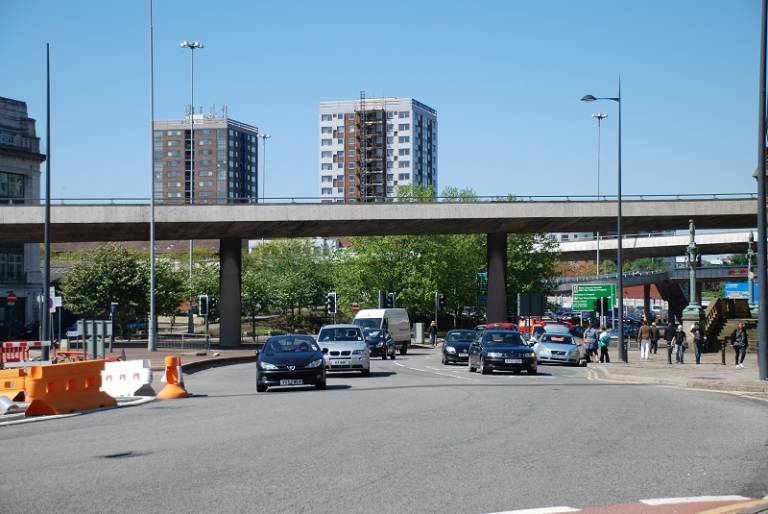 Emissions, especially of CO2, in the transport sector are an immense and growing problem. The so-called “Diesel-scandal” in Germany showed how cars directly endanger human health. It is not only the use of a car that causes these emissions, but as well the production of motorcars. Transport is responsible for 28% of energy related GHG emissions and is the fastest growing emissions source.

From the energy to generate the primary products onto the energy to produce the vendor parts, including the logistical “chain” and the energy for transport up to the final energy the car uses in service CO2 is emitted. And: We should also be aware of the social problems in the production of the parts of a car and its primary sources.

There may be ways to reduce energy in producing and using cars, but with any kind of engine or energy the future car might be running, it only will be working with less cars, if we want to avoid a global climate disaster. The motorcar industry must not only reduce emissions of the car, it as well must be part of a process towards other ways of mobility, ways to live in sustainable environments.

This process obviously is very complicated and many jobs – especially in Germany – will change or made redundant.

Worldwide until 2050 the amount of cars could triple to 3 billions, share of transport of total GHG emissions could rise to 70%. Most of this growth will be happening in Asia.

Therefore sustainable mobility must be a central pillar of development in Asia, Africa, Latin America.

Missing transport infrastructure and lacking public transport leads to cities falling back and – holding them back from unlocking their potential as low-carbon machines of prosperity and social cohesion. To drive global transport transformation (Verkehrswende), Germany launched the Transformative Urban Mobility Initiative (TUMI) at the Habitat III conference in Quito.

Leader of the Centre of Mobility Culture,

Helmut Holzapfel is a civil engineer, transportation scientist and urban planner. From 1985 until 1993 he was a government official at the Transport Ministry of North Rhine-Westphalia. Between 1995 and 1998 Holzapfel was the highest transport official in the German state of Saxony-Anhalt. Since 1993, he has been a professor at the faculty of Architecture, Urban and Landscape Planning at the University of Kassel. From 2005 until 2008 he was dean of the faculty. Since 2009 he has led the research project 'Sintropher' in close collaboration with Sir Peter Hall. He is also co-editor of the transport-planning journal 'World Transport Policy and Practice'. He had positions as a visiting Professor in Vienna (Austria) and in Alessandria (Italy). He is teaching at the University of Dortmund.

Since 2015 Holzapfel is head of the Centre for Mobility Culture in Kassel, Germany, also in 2015 his recent book “Urbanism and Transport” appeared.

Helmut Holzapfel is a member of the Advisory Board for Integrity and Corporate Responsibility of the Daimler AG, Stuttgart, Member of the editorial Board of the journal Verkehr und Technik, Co-Speaker of the commission of innovative transport of the Friedrich-Ebert-foundation and advisor of many regional and urban governments and public transport companies.

Daniel Moser is ‘Sustainable Urban Mobility Consultant’ at GIZ in Germany. As consultant and advisor he is conducting interdisciplinary projects comprising urban mobility, strategic city design and global transport policies for cities in developing and emerging countries as well as consulting the German Government on its global sustainable mobility efforts. Prior to joining GIZ Daniel worked on the development of the Global Transport and Oil Demand Strategy and international campaigns for better urban mobility at Greenpeace International as well as led the development of the new urban mobility strategy at Greenpeace Germany. He holds a Master’s degree in ‘City Design and Social Sciences’ from the London School of Economics where he conducted and published research on citizen participation, urban technology and innovation.