Dr Christos Papastergiou asks whether leftover sites can act as a resource for urban life by hosting temporary or alternative uses. Image: Photographs of public leftover sites, produced as by-products of urban sprawl, in the suburban area of Nicosia

My doctoral research introduces the term ‘Leftover City’ in order to investigate the presence of leftover sites in urban environments and the impact that these sites had historically and still have in the work of architects, critical theorists, artists as well as policy makers and city users.

I use the term ‘leftover’ to describe sites that are abandoned, underused and, usually, neglected by the dominant patterns of use in the city. To understand the phenomenon of leftover sites, I consider both the historical conditions and the mechanisms that are responsible for their production. I investigate the varied forces, circumstances and actions that create leftover sites, and I explore the similarities and differences between leftover sites from various places and eras.

In the first part, I discuss the Amsterdam Playgrounds project by the Dutch architect Aldo van Eyck, which consisted of the conversion of more than 700 leftover sites in Amsterdam into playgrounds between 1952 and 1978. In the second part, I focus on a series of projects that I developed over a period of five years in architectural competitions relating to different leftover sites in Nicosia. The two parts constitute both a structural and a methodological division. In the first part, the leftover sites are explored through the adaptation of play, while in the second part the leftover sites are explored as informal gardens through the historical evidence about the role of gardens in the identity of Nicosia. Whereas the first part takes an analytical approach, the second part adopts a propositional approach; and whereas the first part acts as an archive for discussing ideas and design strategies, the second part takes the form of a laboratory in which these ideas and strategies are applied in a new context.

The research question that I introduce is whether leftover sites can act as a resource for urban life by hosting temporary or alternative uses. The ‘Leftover City’ is a term that describes the possibilities that the sum of leftover sites can have for the city when they are acknowledged as resources, and when they are documented and treated as a network parallel to the dominant routine networks of the city. By exploring the concept of the Leftover City, the thesis contributes to the broader discussion about urban sustainability and, in particular, the sustainable development of cities with a localised character. It also adds to our understanding of the role of architectural design as a means of enhancing the existing identity of a locale. 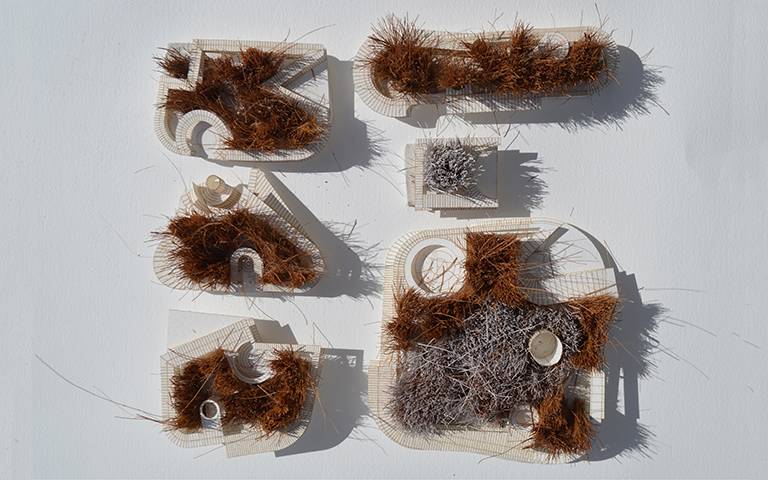 Image: Models of the leftover sites as islands with a natural context at their core and framed by a programmatic zone. Lacrimae Nicossienses project.

My research on the Leftover City has been developed in parallel with my architectural practice draftworks architects. This parallel course has helped me realise that the ideas and strategies discussed in the thesis about the leftover sites can have an impact on the practice of architectural design. ‘Leftoverness’ can become a strategy to be used in architectural design. Leftover parts, as the by-products of the design process, can become essential in the design of every building. Specifically, the leftover part can be the informal part of the project, the part that is less defined and programmed, especially when combined with the element of the garden. These parts of the house are comparable to the role that the leftover sites have for a city: they are not considered necessary, they are often overlooked, yet they are the places that can host all the informal activities of the city, they are the places that enrich the city, and by extension a building, with a set of countless possibilities.

Dr Christos Papastergiou completed his doctoral thesis ‘Leftover City. Alternative Uses of Leftover Sites in Amsterdam (1952–1978) and Nicosia (1974–2014)’ at the Bartlett School of Architecture in May 2019.