The ninth of UCL global Built Environment Club was launched at a special event on 14 September in Tokyo. Those present included UCL alumni and associates as well as the British Ambassador. 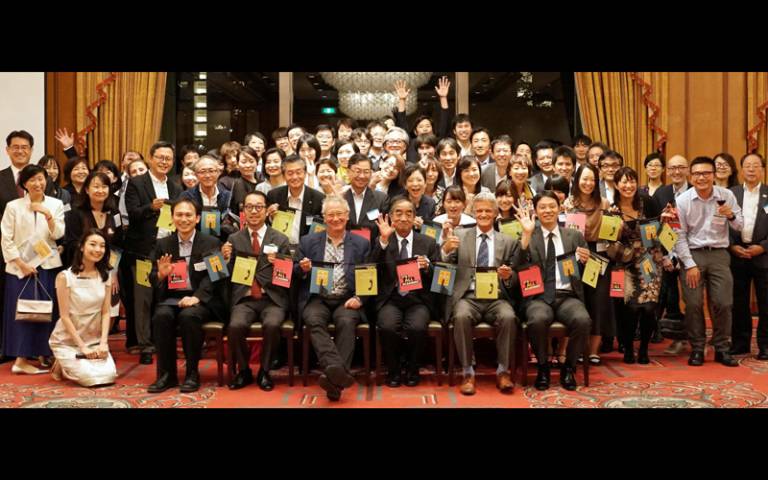 Given the advent of Japan’s forthcoming Olympics and Paralympics and the country's increasing need for knowledge in designing places with greater accessibility for its ageing population, the creation of the newest UCL Built Environment Club (BEC) in Tokyo is particularly timely.

The launch event took place in the grand setting of the Tsunamachi Mitsui Club (see below), where the 81 invited alumni and their guests and associates were welcomed by Professor Jun Ueno, The President of Tokyo Metropolitan University and the new club’s first chairperson. Next to speak was Britain’s Ambassador to Japan, His Excellency Paul Madden, who congratulated UCL for this new initiative.

The keynote address was given by Peter Bishop, Professor of Urban Design at The Bartlett School of Architecture, who shared his insights into how urban renewal and regeneration can adapt to changing demographics. He noted that both the UK and Japan have much to learn from each other’s development through the sharing of knowledge bases, and warmly welcomed future collaboration with the many universities represented in the room.

UCL’s Japan Ambassadorrofessor of Opthalmology, Shin-Ichi Ohnuma, generously contributed to the launch brochure by reflecting on the long historical associations that UCL enjoys with Japan. This tradition continues with the recent UCL-Japan Youth Challenge for pre-university students, as well as the UCL Grand Challenge Ageing Symposium with Osaka University.

David Cobb, The Bartlett’s Director of Business Development, then introduced the inclusive conceptual thinking behind all UCL BECs. He shared his analysis of both the courses undertaken by the alumni present and of the organisations represented. The latter included government ministries, several universities and research institutes, construction and professional services and related industries, from pharmaceuticals and medicine through to life insurance, the police, museums and the press.

Later on, Seiji Takamatsu shared further details on the aspirations for the new club. Finally, David thanked the sponsors, in particular the efforts of the small ‘core group’ who made the event such a success. Special appreciation was extended to alumnus Seiji Takamatsu, Managing Director of Space Syntax (Japan), for his leadership in making the event and club launch happen.

Attendees of the launch were treated to a tour of the host building and its fabulous Japanese garden: a fitting setting for the event, as it was designed by British  architect Josiah Conder, a graduate of the University of London. Later in the evening, guests were treated to a more in-depth description of Conder, his work and the Mitsui Club by UCL alumus Baba Yoshiko.

Conder arrived in Tokyo in January 1877 and progressed to become Professor of Architecture at the Imperial College of Engineering. A statue stands to this day at the University of Tokyo to mark his influence on the architectural profession in Japan. The Mitsui Club’s baroque-style structure, with its free curved lines and decorative accents, is considered to be one of Conder’s masterpieces and was completed in 1913, seven years before his death.

For enquiries about any of the UCL Built Environment Clubs, please email David Cobb at The Bartlett: david.cobb@ucl.ac.uk

Find out more about the UCL Built Environment Clubs