Iain Borden, Professor at The Bartlett School of Architecture has been commissioned to prepare a design brief for a new space for skateboarding to replace the Southbank’s famous undercroft. 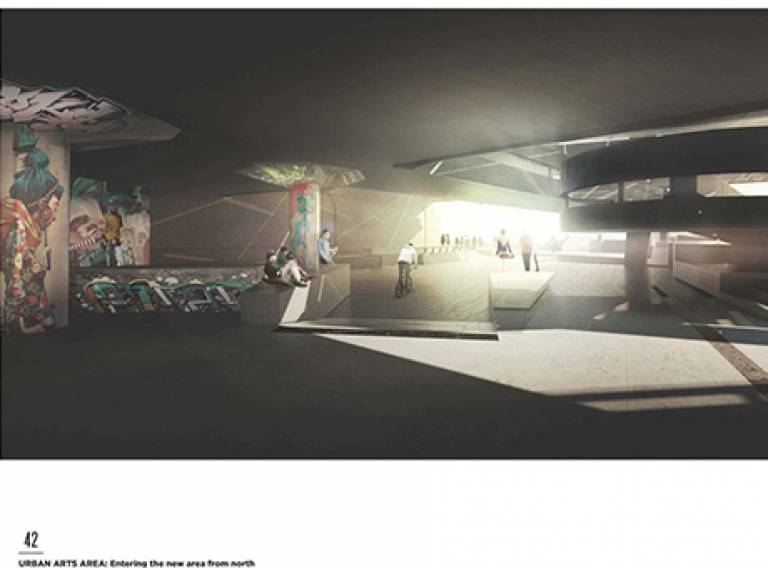 The London Southbank Centre’s plans to undertake a £120 million refurbishment of the complex’s Festival Wing have cast into doubt the future of the undercroft, the site that, rejected by pedestrians after its construction in the 1960s, became a magnet for skateboarders from all over London. From the 1970s onwards it came to be seen as the home of British skateboarding. Current proposals to extend the Festival Wing require the replacement of the undercroft by retail units, the income from which will go towards financing the refurbishment.

The undercroft’s status as the birthplace of London’s skating culture, and the impressive displays of its users, have turned it into a popular tourist destination, and its supporters - including Iain - argue that it is part of the very fabric and spirit of the Southbank complex.

Professor Borden states: “The use of the undercroft space by the skateboarders is in keeping with the ideas of the original architects, who wanted to create dynamic architecture and spaces, left open for unpredictable and unknown uses.”

In recognition of its value as a community resource, the Southbank Centre has designated an alternative space for skating, just 120m from the current site, beneath Hungerford Bridge. Iain Borden, along with architectural designer Rich Holland, both of whom are skaters themselves, were asked to prepare a brief for the new space. Three architectural practices, 42 Architects, SNE Architects and Rich Architecture were in turn invited to respond to this brief. They were to create distinctive designs with a gritty, urban quality, which, while being ideal for skating, must not appear contrived or bear the features of a purpose-built skate park.

£1 million has been set aside to realize these plans, which will be developed with the skateboarding community itself. Jude Kelly, Artistic Director of the Southbank Centre, said: “We want skating and other urban arts to continue to flourish at Southbank Centre…We welcome input from the skateboarders who regularly use the undercroft and any other skaters, graffiti writers or BMXers who want to be involved in helping develop the design."

The Southbank Centre have stressed the importance of the organic nature of this development, and have invited members of the skateboarding community to take part in a selection panel alongside Iain Borden, Rich Holland and Winstan Whitter, a professional skateboarder and film-maker, whose documentary Rollin’ Through the Decades charted the history of British skateboarding. So far there has been a mixed reception from the skating community. Long Live Southbank, the organisers of a petition against the new development, have so far refused to view the plans.

Iain Borden has acknowledged that the new site, while offering the skaters a specially designed space that is also 10% larger, lacks the previous site’s 35 years of history, but states: “If the Festival Wing development goes ahead, the undercroft site is likely to be closed for two to three years anyway. That's a lifetime if you're a teenage skater, so it's important to have somewhere else to skate during the construction – and, if necessary, in perpetuity. So it's worth exploring the options now."

Find out more about the project and hear Iain and Rich discuss their ideas behind the designs on the Southbank Centre Youtube Channel.