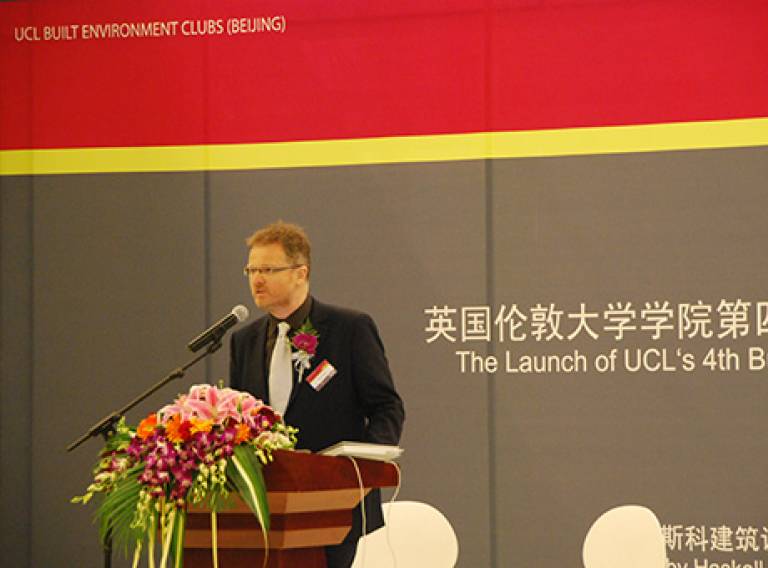 Following hard on the heels of Shanghai, Hong Kong and Singapore, Beijing is a natural host; with its strong academic presence and close proximity to government, many world-class UK Built Environment companies have based themselves there.

The launch, hosted by Haskoll Architects and Designers, took place at the spectacular China Galaxy SOHO Development in Chaoyang District. Welcoming guests, Haskoll China Director, Peter Goldsmith, described how China’s economic boom has led to increased mobility and urbanisation, and how his organisation is reacting to the increased demand in the retail and leisure sectors across the country.

Professor of Architecture & Design through Production at The Bartlett, Bob Sheil, provided the evening’s welcome address. Drawing upon the themes of his Asian lecture tour, which included all UCL Built Environment Club host cities, Prof. Sheil explored the evolving relationship between digital design and physical constructs, a territory he calls “ProtoArchitecture”, the opportunities that are offered for craft, experimentation and invention in manufacturing bespoke architecture, and “design through making.”

Prof. Sheil is a founder of the research group sixteen*(makers), the Digital Manufacturing Centre, and is a co-founder of the international conference FABRICATE. His address concluded with an invitation to the forthcoming FABRICATE 2014 conference in Zurich, which will bring together world-leading thinkers, researchers and practitioners in ProtoArchitecture, and generated considerable excitement by sharing his vision for China to host FABRICATE 2017

As with the other Built Environment Club launches, many of the guests were UCL alumni, the majority of whom had graduated in the last five years from architecture, environment, planning and project management, and represented a broad range of concerns including state-owned enterprises, research and design institutes as well as commercial practices.

The Bartlett’s Director of Business Development, David Cobb, introduced the motivation behind the UCL Built Environment Clubs and directed guests to the Clubs’ LinkedIn Group for more information and regular updates about their activities.