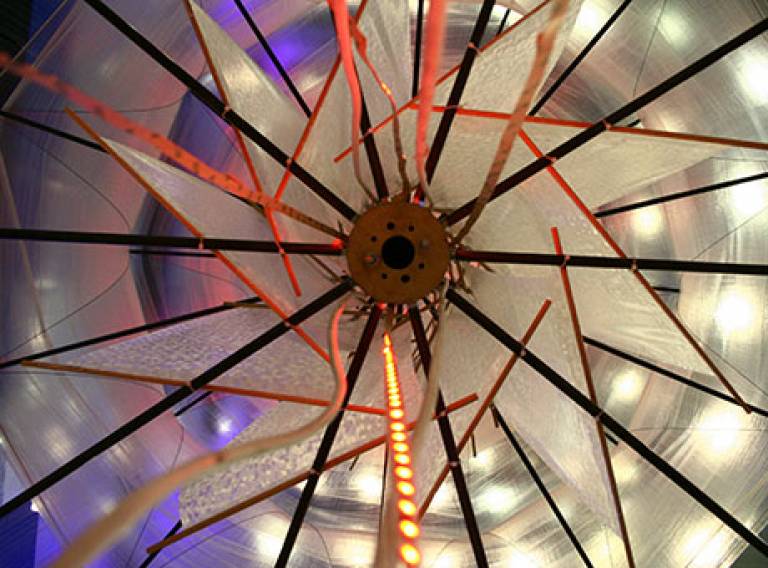 Associated VEIV and PhD candidate at The Bartlett School of Architecture, Moritz Behrens, is part of the Berlin-London-based architecture and design team behind the Sentiment Cocoon.

The Sentiment Cocoon won a prestigious international award for Media Architecture in the category Participatory Architecture & Urban Interaction for its interactive media installation. The ‘Sentiment Cocoon’ is a physical architectural structure that uses a state of the art interactive lighting system to reflect the moods of people who engage with it.

“This award appreciates our continuous strive to push the boundaries of future architecture,” says Moritz Behrens (architect). “The focus is on the exploration of architectural form through digital fabrication, with translucent materials and responsive lighting to facilitate social interactions. Ultimately, the installation turns its surroundings into a stage for social encounter through interaction and observation.“

“The lighting design creates an enigmatic display,” says Konstantinos Mavromichalis (lighting designer). “Natural daylight, from the atrium skylights above, blend with the light emitted from the cocoon’s spine. This allows for rich interactions of varying forms of light and, through the translucency of the material, results in a striking visual display that has been informed by the feelings of the building’s occupants.”

The Sentiment Cocoon is a temporary interactive installation designed by architect Moritz Behrens and lighting designer Konstantinos Mavromichalis for Arup’s headquarters in London that seeks to capture and express human sentiment through the medium of light. Simple interfaces allow participants to express in the public domain how they feel by how they touch. These interactions are then transformed into pulses of light that travel throughout the cocoon.

The system architecture of the artwork allows for the tracking and displaying of several behaviours. Individual swipe cards such as the London Oyster card enable participants to express how they feel based upon three categories related to workplace wellbeing. These parameters are encoded into lighting patterns that suggest the collective mood of participants. The sentiments are encoded in different colours and movement. Colour gradients, velocity and movement are represented through patterns. Over time, the patterns become recognisable as the overriding sentiment of the day.

The suspended structure measures 20m high and 1.4 to 3.5m wide. The 20m tubular PVC interior core is segmented by plywood disks at 1m intervals. Each plywood disk has 10 protruding spokes creating 210 intersection points that are connected with steel cable creating a rhombic pattern and a complete structural system. The Pixel RGB LED system is comprised of four 400 node, 30 degree outward projecting continuous LED strands anchored to the core of the cocoon. Supplied by a 12 VDC power pack and Artnet control unit, the projected light passes through a special lenticular diffusion membrane before landing the partially translucent skin of the Cocoon itself.

The cocoon was operated 24/7 for 13 weeks in total. About 1,880 smart card interactions on six dashboards were logged in total. Participants actively engaged mainly on the way to their desks in the morning, during lunch time or in the late afternoon. Others simply enjoyed watching the colourful and dynamic visualisations. During events like Arup’s summer party, interaction peaks were noted.

In their work Moritz Behrens and Konstantinos Mavromichalis combine architecture and lighting design with interaction design to explore the notion of today’s architecture within mediated urban spaces. Recently and in collaboration with Arup, they designed and deployed the interactive ‘Sentiment Cocoon’, which collects the feelings of building occupants and visualises them through the medium of light evolving from a light-weight translucent structure. Amongst others their interactive media installations have been invited by ‘Verve Cultural’ (Sao Paulo, Brazil) and the EU funded ‘Connecting Cities’ (Berlin, Germany), Nuit Blanche (Toronto, Canada) displayed at the ‘Ars Electronica Festival’ (Linz, Austria) and produced for the European Capital of Culture 2014 (Riga, Latvia) and for the VIVID Light Festival 2016 (Sydney, Australia).