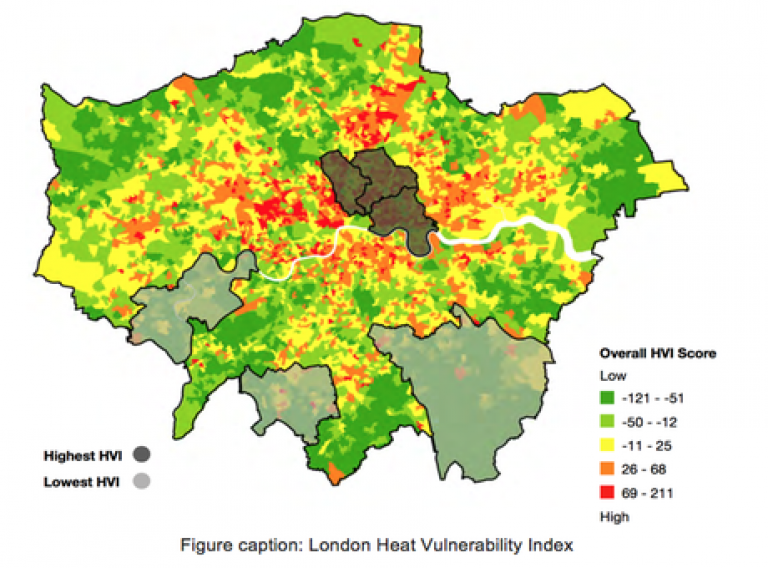 UCL IEDE was a leading academic partner in this 2-year collaborative research project, which was led by Arup and involved academic and industry partners from UCL, King’s College London, Climate UK, HelpAge International and the Satellite Applications Catapult. The contribution of UCL IEDE’s Dr Anna Mavrogianni and Prof Mike Davies to the project built on the outputs of the EPSRC-funded project ‘The development of a Local Urban Climate model and its application to the Intelligent Design of cities’ (LUCID), which studied London’s Urban Heat Island.

The Urban Heat Island effect occurs when heat is absorbed and released by buildings and other humanmade surfaces in urban environments, thus resulting in higher temperatures in cities compared to their rural surroundings. This is more pronounced in highly built-up areas with a lack of green surfaces and trees. Excess heat exposure can have detrimental impacts on human health, especially amongst the elderly and the chronically ill. As our climate becomes warmer due to climate change, the adverse health effects of the Urban Heat Island phenomenon will be exacerbated.

The SHARPER project investigated the seasonal health and climate change resilience of ageing and elderly urban populations and developed vulnerability indices for 3 global cities: London, New York and Shanghai. The study compiled satellite temperature data with information on social, environmental and economic factors that contribute to urban heat vulnerability, including population density, health, mobility and quality of housing. This allowed the identification of areas where the population is most at risk and provided estimates of the resilience of ageing and elderly populations in each city at a high spatial resolution.

The study found that the elderly in Hackney, Islington and Tower Hamlets are most at risk of heat related illnesses during periods of hot weather, especially if suffering by health and mobility issues and/or living in poor quality housing.

It is envisaged that the project outcomes will help architects, engineers, planners, urban designers, property developers, Local Authorities and other policymakers prioritise targeted responses and aid the design of measures relating to planning, design and management of climate-ready urban environments.

You can read articles about the SHARPER project in the Evening Standard, Infrastructure Intelligence and Cities Today.

The final SHARPER report and related infographics are available to download from: http://publications.arup.com/publications/s/sharper