Our special tenth anniversary event, celebrating of ten years of the UCL Energy Institute, took place on Tuesday 21 May. 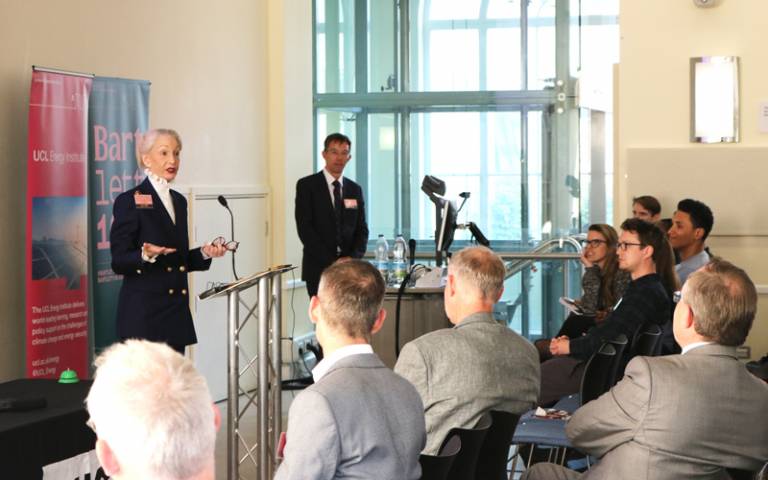 Energy 10: The past, present and future of the UCL Energy Institute

Over the course of the evening, we looked back over ten years of changes in energy research and forward to the future of energy research with a series of talks and discussions. This was followed by a reception and exhibition highlighting the broad range of the Institute’s work across teaching, research and partnerships.

The celebration, which was held in UCL’s main Wilkins Building, marked a landmark in the history of the UCL Energy Institute: ten years since its founding as part of The Bartlett Faculty of the Built Environment. The event was organised jointly by UCL Energy and The Bartlett as part of ‘Bartlett 100’ – a 100-day campaign of stories and special events marking a century since the naming of the Faculty (see Bartlett100.com). We were delighted to be joined by Professor Alan Penn, Dean of the Bartlett, Professor Michael Arthur, Provost and President of UCL, and Lady Judge CBE, chair of the Institute’s International Advisory Board.

After opening remarks from Professor Penn, the talks began with a brief talk on 'Key elements of the energy transition, 2009-2019' by Professor Jim Watson of the UCL Institute for Sustainable Resources (our partner institute), who is also Director of UKERC. This looked at how the global concensus on climate change has led to concrete targets, and concrete actions such as the increasing importance of renewable energy to the UK's energy mix.

After this Professsor Tadj Oreszczyn, UCL Energy’s Founding Director, gave a brief history of UCL Energy. Beginning in 2009 with just five members of staff, the Institute has grown massively in ten years to become a world-renowned centre of energy research, with over almost 80 research staff, 64 doctoral researchers and 125 hundred Mater’s students – plus a team of professional services staff.  Professsor Oreszczyn highlighted our partnerships with funders such as the EPSRC, and ties with BEIS, Ofgem, the Greater London A uthority and the Committee on Climate Change, as well as major industry players suchh as UK Power Networks, EDF and PassivSytems.

Among the achievements mentioned were important energy models such as UK TIMES, papers published in international journals, and research focussing on energy and health, electric vehicle take-up, thermal insulation in the real world, electric planes, and gender and energy use in Mexico. Major success stories include the impact of our research on the goals to reduce GHG emissions in shipping agreed by the IMO in 2018 and the London Building Stock Model helping the GLA plan energy refurbishment and fuel poverty strategies.

After this, we welcomed eight PhD students, selected to represent a broad range of research activity, who were each given two minutes to present their thesis to the audience. The task of deciding the best pitch was given to Lady Judge, who ended up picking two winners, adding her own £50 prize to the £50 voucher awarded by the Institute.

The final part of the spoken event was a panel discussion entitled 'Where will the energy transition have reached in 2029? And what role will research have played? The debate was kicked off by three of our top researchers: Dr Maria Kamargianni spoke on new markets, Dr Catalina Spataru on new technologies and Michelle Shipworth on new societal trends. Members of the audience then joined in the discussion, and a lively debate followed on some of the major national and global challenges facing the future of energy research and industry.

Thr formal part of the evening concluded with closing remarks and a summary of the Institute’s achievements from Lady Judge, before guests were invited to a drinks reception and exhibition of posters and digital animations in the nearby South Cloisters.

Around 30 displays highlighted the huge range of work being undertaken across all parts of the organisation, including teaching, administration, research projects, energy modelling and partnerships. Topics covered ranged from the latest Centre for Doctoral Training, ERBE (Energy Resilience and the Built Environment), to research into Energy and Artificial Intelligence and work on energy in developing countries.

The audience of around 130 people was made up of students, staff from both the EI and our partner institutes at UCL, staff from The Bartlett Faculty, and colleagues from other parts of the University. We were also joined by a number of invited guests and partners from industry, government and other academic institutions.

It was a very special evening, allowing us to share with our many friends and stakeholders a look back at the journey the UCL Energy Institute has taken to become the UK's leading centre on energy demand and energy systems. And with the global energy transition at a crossroads, the need for our interdisciplinary research, teaching programmes and outreach activities is clearly greater than ever.