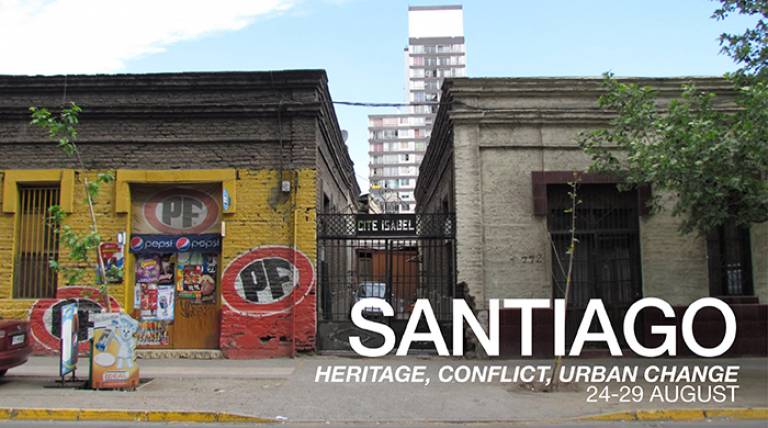 The last census showed that – for the first time in decades – the central districts of Santiago de Chile have experienced an increase of their population. This has implied a massive change in the social and spatial dynamics of the area.

The several neighbourhoods within central Santiago have faced these transformations in different ways: while some neighbourhoods closer to downtown opened up to massive real estate investments, others have struggled in reaching a balance between speculation, preservation of their architectural and cultural heritage, pressures of new social groups arriving to the area.

This summerLab took place in a specific area of central Santiago (Portales Matucana), where these phenomena of transformation and increased spaces of encounter for different social groups have been particularly evident, and where local authorities are currently investing in.

Currently, the Ilustre Municipalidad de Santiago (IMS) is working on the “Programme of integral revitalisation of emblematic neighbourhoods and buildings”, developed by the IMS along with the Subsecretaría de Desarrollo Regional (Subdere), the Consejo Nacional de la Cultura y las Artes (CNCA) and funded by the Inter-American Development Bank (IDB).

The programme has emerged from an inter-sectorial diagnosis of Santiago’s central districts evolution during the last decades – showing an intensive and accelerated transformation of its social and functional fabric, generating diverse conflicts at different levels. The Centre for Social Conflict and Cohesion Studies (COES) – our partner in the organisation of the Santiago summerLab – has been collaborating with the IMS, providing advice and monitoring in the context of the Revitalisation programme.

Trying to identify spaces for economic activation, for recovering physical and social heritage and reactivating public spaces, the workshop – building also on the input of local communities, authorities, and professionals – has sought to explore and map out the spaces of social conflict of Portales Matucana’s transformation, and to understand the nature of its socio-spatial tensions.

We have worked on envisioninig possible pathways and alternative strategies for inclusive and equitable development in the area.