This research will apply innovative methods and rapid prototyping – such as 3D mapping, augmented reality, as well as 3D printing - to develop a digital archive in Lima Building upon the DPU research platforms ‘The Heuristics of Mapping Urban Environmental Change’ and ‘Water Justice in Latin American Cities’, CASA’s world-leading methodological innovations in spatial analysis and the Urban Laboratory’s ‘Picturing Place’ methodology, this research seeks to develop innovative and critical strategies for the reading, writing and audiencing of maps. It adopts a participatory action-learning approach, enabling local community mappers to explore innovative pathways for reframing hegemonic cartographies and develop the writing of more inclusive representations. It interrogates the role that such representations can play in contesting exclusionary socio-environmental processes and open up spaces for collectively negotiated outcomes between marginalised citizens, planners and policy makers, ultimately contributing towards the planning of more democratic and sustainable cities.

Taking into consideration the potential ethical, societal, legal and regulatory issues underpinning mapping, the research will apply innovative methods and rapid prototyping – such as 3D mapping, augmented reality, as well as 3D printing - to develop a digital archive in José Carlos Mariátegui and Barrios Altos, the two study sites in Lima. The main outputs are in the form of 3D models and a digital mapping platform. The latter will act as a repository for research on the urban Global South and an archive of knowledge accessible to those with interest in urbanisation, sustainability and justice. At the policy level, it will encourage better planning practices, representing wider citizens’ perspectives, ideals and aspirations. Moreover it will stimulate public debate and awareness and be a showcase for cross faculty and cross global collaboration.

For more details about the workshop, please contact: Adriana Allen or Rita Lambert

During the inaugural field visit to Lima we will be conducting research on two sites. One of which is part of the inner city (Barrios Altos), and another which lies on the periphery at the peri-urban interface (José Carlos Mariátegui).

One of the two area for this research is José Carlos Mariátegui which, like many other informal settlements in Lima, is expanding on the steep slopes of the city’s margins. In the absence of affordable housing and national housing policies, the occupation of the slopes is the only viable option for the vast masses of the urban poor, which are exposed to high levels of physical risk and water injustices.

The occupation of such ‘vertical’ areas threaten the sustainability of the city as they coincide with the ‘Lomas Costeras’, an essential ecological infrastructure for recharging the aquifers that guarantee water for Lima and regulate the effects of climate variability.

3D mapping would not only capture the difficult terrain that has to be negotiated by the inhabitants but the practices that make these slopes habitable. It would be a means to open up dialogue between the inhabitants and the institutions which have various uncoordinated programs and projects in this area. It would also seek to enable the integrated planning of such areas and also support the preservation and management of the ‘protected’ ecological infrastructure for the functioning of the city.

Barrios Altos (BA) is located in the historic centre of Lima in an area declared UNESCO World Heritage Site. It is characterised by overcrowded conditions and lack of basic services. Due to its strategic location, it has high land values, however its buildings are left to deteriorate. The lack of attention for its rehabilitation, together with the illegal change of use into storage, which is occurring at a fast pace, can be understood as a means to evict many of vulnerable inhabitants living on high value land. The process that converts many of the buildings into storage occurs through a retention of the facades while gutting the interiors for storing the containers originating mainly from China.

3D mapping would capturing the process of slow eviction and make visible the changes in the urban form behind the retained facades. It would seek to open up dialogue between the various stakeholders, advancing a more inclusive and socially just understanding of urban renovation.

The first fieldwork took place in Lima - Peru, from the 4th to the 11thof February 2014. It brought together staff from the DPU (Adriana Allen, Rita Lambert and Mónica Bernal Llanos) and CASA (Flora Roumpani), as well as Drone Adventures from Switzerland, to join our local partner organisations (CENCA, CIDAP, and Foro Ciudades para La Vida), as well as over 30 community members from two case study sites - Barrios Altos and Jose Carlos Mariátegui - in Lima.

The workshop was conducted in two simultaneous modes: mapping from the sky and mapping from the ground. These were conceived with the purpose of articulating grounded applications and cutting edge technologies for community-led mapping and visualization and to explore the political agency and capacity of mapping to reframe the understanding of and action upon highly contested territories. 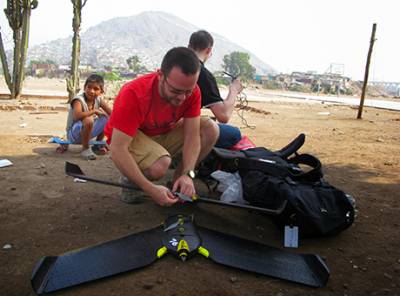 Mapping from the sky used drones to capture 2D and 3D outputs. Moving beyond militaristic and surveillance applications, we explored their value for planning in areas undergoing otherwise 'invisible' change. In Barrios Altos, the historic centre of Lima and UNESCO world heritage site, the birds eye view captured through the use of drones made visible the otherwise ‘unseen’ processes of slow eviction and land use change occurring behind both conserved and deteriorating facades. In Jose Carlos Mariátegui – an area developed in the skirts of Lima through a complex history of grassroots invasions and informal land trafficking - the maps enabled a detailed understanding of the terrain and its shifting borders, as well as the apprehension of the ‘quebrada’ (ravine) as a system of interconnected settlements, increasing risk and threaten ecological infrastructure. The outputs produced by the drones were then used as the basis for mapping from the ground. Mapping from the ground brought together men and women from each of the two settlements, to discuss and decide what to map, why and how. Mapping was discussed by the residents as a way to apprehend their territory and a means to document and denounce otherwise invisible processes of unwanted change in their neighbourhoods. It was also seen as a strategic activity to foster dialogue between stakeholders and to expand the room for manoeuvre to promote strategic interventions. Once decisions were made about what was important to map, pilot transects were traced to collect the required information. The fieldwork tested various crowdsourcing applications using mobile phones to collect data. Moreover, the pilot walks served to reflect upon and refine the mapping focus, the selected variables and methods for further mapping. Having completed this first phase, DPU and CASA returned to London to further develop a mapping methodology tailored to the unique contexts of Jose Carlos Mariátegui and Barrios Altos. The next phase, in April 2014, will further focus on data collection as well as explore planning scenarios based on the printed 3D models captured by the drones. The process activated by Mapping beyond the Palimpsest is also feeding into the practice module of the DPU MSc Environment and Sustainable Development, which will bring to Lima 35 students, 5 tutors and 2 visiting scholars from the Indian Institute of Human Settlements (IIHS) from the end of April until mid-May to deepen and consolidate this spatial mode of enquiry and action planning in Barrios Altos, Jose Carlos Mariategui and two further sites (Cantagallo and Huaycan), which together provide a nuance approximation to the challenges faced in the urban region of Lima to move towards more environmentally just scenarios.