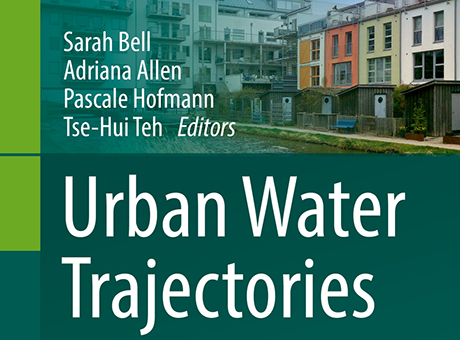 Co-edited by Adriana Allen and Pascale Hofmann in collaboration with Sarah Bell and T. H Teh, published by Springer

Water is an essential element in the future of cities. It shapes cities’ locations, form, ecology, prosperity and health. The changing nature of urbanisation, climate change, water scarcity, environmental values, globalisation and social justice mean that the models of provision of water services and infrastructure that have dominated for the past two centuries are increasingly infeasible. Conventional arrangements for understanding and managing water in cities are being subverted by a range of natural, technological, political, economic and social changes. The prognosis for water in cities remains unclear, and multiple visions and discourses are emerging to fill the space left by the certainty of nineteenth century urban water planning and engineering.

This book documents a sample of those different trajectories, in terms of water transformations, option, services and politics. Water is a key element shaping urban form, economies and lifestyles, part of the ongoing transformation of cities. Cities are faced with a range of technical and policy options for future water systems. Water is an essential urban service, but models of provision remain highly contested with different visions for ownership of infrastructure, the scale of provision, and the level of service demanded by users. Water is a contentious political issue in the future of cities, serving different urban interests as power and water seem to flow in the same direction.

Cities in Africa, Asia, Australia, Europe and South America provide case studies and emerging water challenges and responses. Comparison across different contexts demonstrates how the particular and the universal intersect in complex ways to generate new trajectories for urban water.