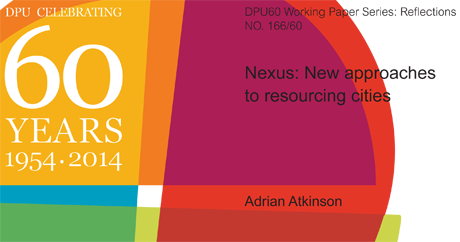 Cities are abjectly dependent on a wider world for resources to sustain them – traditionally from their immediate hinterland but today supplied from all around the world. They then have to confront the problems of dealing with the residues of their consumption as to where these go and what happens to them. This paper looks first at how these dimensions of urban life were dealt with in the more distant past and what happened in the course of modern development to deal with growing and compexifying cities.

In the face of the modern environmental movement and the fears concerning the sustainability of cities, new initiatives began to be taken that, at least in cities in the South, fell far short of creating efficient and pleasant urban environmental conditions. Now a new wave of initiatives is starting under the title of ‘the Nexus of water, energy and food security’, based on a ‘paradigm change’ that sees the need to find more effective ways, particularly of adequately resourcing (southern) cities that, it is hoped, will at the same time ameliorate festering environmental problems.

Officially this is seen as opening the door to improved economic growth. We might, however, see these initiatives as the first steps towards a recognition that the future will not be ‘onwards and upwards’ but, rather, be a return to conditions prior to the emergence of modernity.