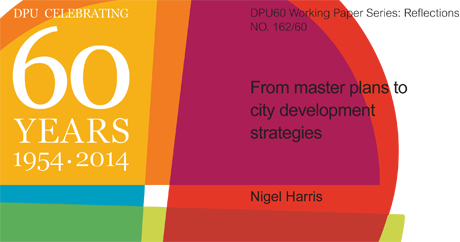 Up to the twentieth century, city self-government and self-financing was historically the norm. Then both a major slump and two world wars impelled in Europe the centralization of government powers in national States. It was this degree of centralization which was inherited by the former colonial dependencies, the newly independent countries, in the 1950s and 1960s. Those countries faced unprecedented levels of urbanisation and unmanageable concentrations of population. This led governments and aid agencies to emphasize rural development (to discourage out-migration to the cities), population redistribution and industrial decentralization.

However, a different tradition stressed the economic importance of raising productivity through the concentration of population and resources, propelling rather than restricting economic development. This approach was much more common in north and South America, and received some recognition in some postwar city planning efforts in developing countries (notably in Calcutta, 1966). However, what forced this approach to become the norm in the big cities of the developed countries was the deindustrialization of the 1970s and 1980s and economic globalization, forcing city planners to develop innovative approaches to high unemployment and urban and industrial dereliction.

The DPU began graduate programmes and consultancies in city economic management from the 1970s, and was instrumental in persuading the British aid ministry to revise its exclusive stress on rural development, leading to the Koenigsberger mission to India to advise on aid to urban India (1979).

By the end of the 1980s, numerous forces were pushing the aid agenda in new directions, culminating in new policy agendas at the same time by the World Bank and UNDP, and the second UN Conference on Human Settlements (Istanbul, 1996). A new partnership was set up between the World Bank and UNHCS (Habitat) to define the terms of both the new City Development Strategies and a new attack on city slums and squatter settlements, both aims then being folded into a new – and vastly much better-funded – coalition of aid donors and other relevant organisations, the Cities Alliance.

City Development Strategies spread with great speed, particularly when the Japanese government undertook to finance the upscaling in Asia. When, in 2002, an initial assessment was undertaken, it was clear a number of difficulties were becoming apparent so that production of an old style plan had sometimes superseded the long-term institutional reform implied in the new policy. Furthermore, parallel measures to decentralise central government powers to the cities, without which city development strategies could not be fully exploited, had been much less consistent.