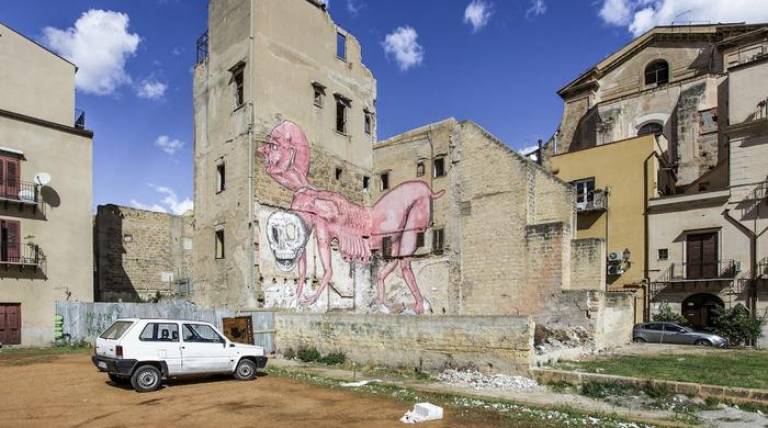 Palermo has a strategic role within the Mediterranean and European context. It has social and economic relations with the African continent and the Middle-East countries and reminiscence of its history as city conquered and dominated by various cultures, populations and religions, from Phoenicians to Carthaginians, from Romans to Arabs.

Its Greek name, ‘Panormos’, can be literally translated as ‘all port’: Palermo has always been a fundamental commercial exchange junction, and acquired strong inter-cultural features which are still present nowadays and strongly identify and characterise it. Its urban historical centre, with its incredible architectural heritage, is suspended in a general sense of decadence, recently exacerbated by the European financial crisis, and the increasing influx of migrants and refugees.

Participants have worked along with urbanita, Push and the University of Palermo mapping out the actual migrant urbanisms in the historical centre of  Palermo while unveiling cases of emergent people-led activities – and questioning to what extent these manage to involve and empower newcomers.

By looking at the political, social and economic contexts in which these initiatives unfold, as well as analysing their impact at the urban scale, participants have asked to highlight new tendencies of urban development, their actors and agency. At the same time, engaging with authorities and investors, the DPU summerLab has sought to make the current projects influential at various levels and scales, and to inspire a new enabling framework for similar experiments to unfold.

During the first day participants have engaged in urban explorations in both central and peripheral areas in order to acquire a critical understanding of the urban context as a whole. On the second day, participants have encountered development partners and citizens, uncovering existing spatial narratives, and dynamics amongst several stakeholders.

From the third day on, we had started narrowing down the objective of our urban intervention strategies, while keeping a constant dialogue with local actors and continuing to gather data from the observation of the grounds of investigation. The outcomes of the workshop was presented in a final meeting with summerLab’s partners, local actors and the wider public.