The DPU-funded 'Our Land: Southwark Stories' short-films project explores the use, abuse and potential of public land in the inner-London Borough of Southwark. 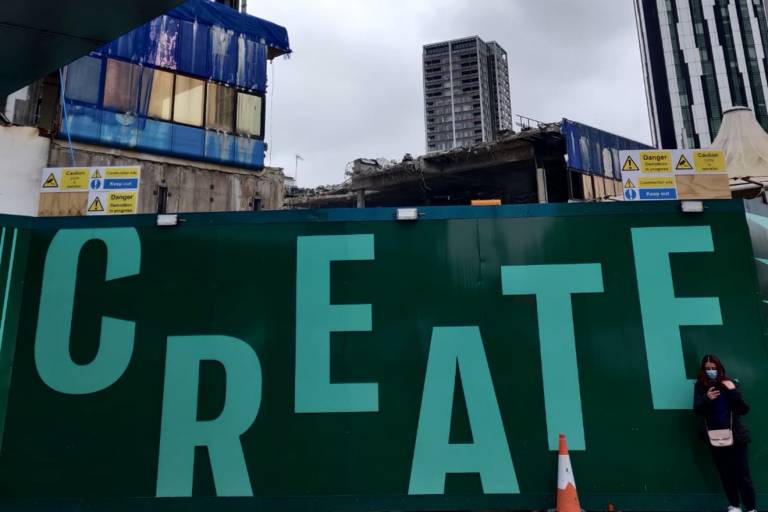 The project was coordinated by Barbara Lipietz and Tim Wickson in collaboration with the Southwark Planning Network and the interdisciplinary media artist Daniel Oduntan. Funding for this project was provided by the DPU.

“Imagine… how much better our local world could be if our council's land assets were seen as a common resource about the use of which there should be a broad discussion” (Mark Brearley, Proprietor of Kaymet and Spokesperson for Vital Old Kent Road)

Our Land: Southwark Stories audio-visual project aims to document and amplify community perspectives on the use, abuse and potential of public land in the inner-London Borough of Southwark. It is part of a broader activist-orientated pedagogical collaboration between the MSc Urban Development Planning Practice Module (DEVP0030) and a network of community groups and activist attempting to promote community participation in planning decision-making in Southwark (the Southwark Planning Network).

If planning can be understood, in part, as a form of ‘performed storytelling’ (Sandercock, 2003), attempts to (re)shape the narratives surrounding key planning issues, such as public land, are an essential step towards promoting more just trajectories for our cities. Overlaying interviews conducted by Barbara Lipietz and Tim Wickson with footage shot by interdisciplinary media artist Daniel Oduntan, the short videos presented here offer seven such critical counter-narratives.

At a time when public land too often remains conceived as the private asset of the local state (Rolnik, 2019) - something to be assembled, packaged-up and released to private developers - this project serves two main objectives. First, it directs critical attention to the deleterious and overlapping effects of such dominant planning approaches on diverse urban fabrics; second, it highlights the enduring potential of public land as a canvas upon which more just forms of city making might be imagined and unfolded. After all:

“if you can’t do this on public land where can you do it?” (Richard Lee, Southwark Planning Network Member).

What would a public land management strategy look like, if elected and appointed decision-makers were reimagined as stewards of a common resource? How would such a reimagining shape the type and nature of developments coming forward on public land? What kinds of deliberative spaces might enable such a reframing of public land? These are just three of the questions posed by the Our Land: Southwark Stories collection, taken forward by MSc Urban Development Planning students in their Term 1 practice module.

The findings from this project, together with a preview of Our Land: Southwark Stories short films, have since informed two public workshops on the topic convened by the Southwark Planning Network with support from DPU staff and students. Taking place in the run up to the local elections, these workshops aimed to develop a set of common community aspirations around public land and its role in planning, to be presented to local politicians seeking re-election in May 2022.

Now available as full-length short films, the seven Southward Stories are presented below:

Acknowledgements: Thank you to all those who gave their time to be interviewed as part of this collaboration and to Southwark Planning Network. Many thanks also to Daniel Oduntan for guiding the video production and editing process, and the Bartlett Development Planning Unit for its funding of this work.