The event, hosted on 9 October, responded to this year's World Habitat Day theme of 'Housing for All: A Better “Urban” Future', and brought together various communities of practice converging in the defence and production of the ‘right to housing’ as the ‘right to life'. 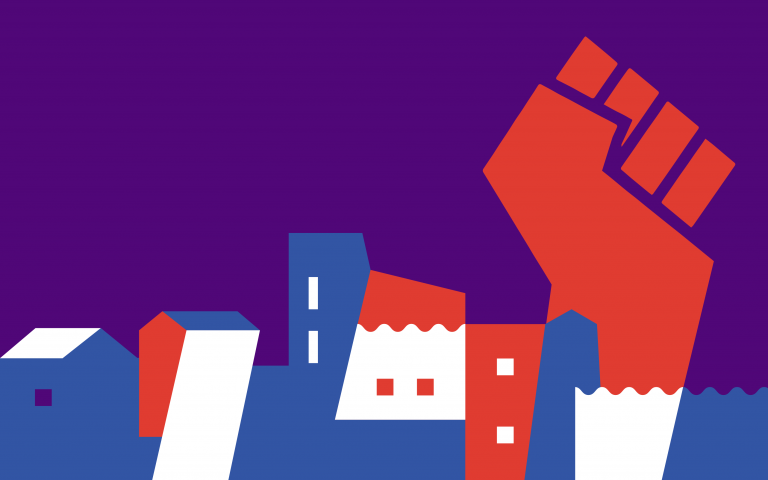 This year’s World Habitat Day was themed Housing for All: A Better “Urban” Future, a theme that echoes the UN SDGs and New Urban Agenda to Leave No One Behind. Yet, COVID-19 is showing us that many are being left behind. While COVID-19 is primarily referred to as a health and economic emergency, the right to housing and housing related services play a critical role in how we are able to respond to the pandemic collectively.

The right to adequate housing has become prominent in the human rights agenda, in the light of an increased financialization of housing that has raised precariousness, the intersection between climate change and housing rights and in the face of the current pandemic that has exposed pre-existing inequalities and the critical role of housing in how we are able to respond collectively.

The 'Housing rights: Looking back, looking forward' event was co-hosted by the DPU alongside the Habitat International Coalition (HIC), the International Institute for Environment and Development (IIED) and United Cities and Local Governments (UCLG), and took place on October 9th 2020. The main aim of the event was to bring together various communities of practice converging in the defence and production of the ‘right to housing’ as the ‘right to life’, and to move towards a collective debate on how our responses are changing / need to change in the current situation.

The online gathering paid special attention to the need to open a dialogue between a wide array of speakers converging in the defence and production of the ‘right to housing’ as the ‘right to life’. This dynamic discussion has started in an important moment at the fore of the struggles we face, increasingly endangered through old and new machines of massive evictions, displacements and dispossession, and in the face of the current pandemic.

Looking back: learning from the importance of grounded alliances to transformative action

The session was introduced by Adriana Allen, President of Habitat International Coalition, who argued that a critical question is “how to sustain, deepen and expand the measures to protect housing rights beyond the pandemic”. She expressed the need to learn from the multiple ways to activate housing rights that have been seen in recent years in different contexts, to tackle homelessness, also to stop evictions, a collective learning that needs to be used “to scale up such measures”.

Emilia Saiz, UCLG Secretary General opened and moderated the first panel under the question: What has changed in the way we are approaching housing rights?. The Secretary General of a Centenary Movement of Local and Regional Governments explained that the level of government closer to the ground is a critical ally for the solutions in the defense of housing rights. She relayed a message from the global network : ”housing is a critical cornerstone for the UCLG future agenda moving forward from COVID-19 (...). Emilia stated the need to focus on what is changing in the narrative: “housing crisis is perceived as a financial crisis, not seen from a human rights and justice perspective”.

Raquel Rolnik, former UN Special Rapporteur on Adequate Housing highlighted “the emergence of a new wave and new generation of housing movements in places where this didn’t exist for many decades”, particularly she mentioned the arise of those movements in several countries in Europe and in the US as a response to the housing crisis.

Ruth McLeod, from the DPU and Former Executive Director of Homeless International described how Homeless International worked on finance of land through civil society initiatives but with issues of scaling up, not just about mobilising people. She argued that “processes, mechanisms and techniques for the access to land were very important” in order to package everything up to create a large-scale intervention.

The conversation continued with the intervention from Diana Mitlin, from IIIED, who explained two main trends: the change of language “moving away from a focus on rights to a focus on justice” linked to a problem of the lack of scale and the frustration of social movements, when they fall into the trap of asking for change but getting only a superficial reform. The second trend described by Diana was the response from governments to housing opportunities. In this sense, according to her “the approach has not moved far enough to contest affordability and cover all the solutions within housing needs”.

Arif Hasan, from the Orangi Pilot Project and Urban Resource Centre, Pakistan,  launched a reflection on the need to enlarge coalitions to affect policy-making. While the market is leading almost everywhere, housing rights don’t become part of policy at a global scale “Projects also remain locally, in certain districts, rather than being implemented throughout the whole country or globally”.

Looking forward: How are our responses to advance housing rights evolving?

The first part of the second panel was moderated by Barbara Lipietz from DPU who asked the speakers to identify the key tactics that have been effective for claiming housing rights, in order to think about convergence between responses to advancing housing rights.

Empowering the community in the urban and rural areas and raising awareness of their land and housing rights is one of the main tactics for the Zimbabwe Land Rights Movement, stated Hilary Zhou.  He added that at an advocacy level, the organization in Zimbabwe is engaging various arms of the state including legislature, parliament, land ministries, to advocate for housing and land rights. The use of the media to spread the news and the participation on collective data for housing rights violations is another tactic.

In Cameroon, Daniel Nonze explained the Association des Amoureux du Livre pour le Développement Local explained strategy with communities focusing on mobilization and training as well as documentation of forced eviction to gather accurate information and mapping the cases in a participatory manner. Daniel Nonze also added the work with the communities to understand and defend their rights and be able to claim them.

The intervention from Paco Morote, Spokesperson from the Plataforma Afectados por la Hipoteca ( Platform for Mortgage Victims) in Spain, argued their important lobbying work to empower people affected by evictions, accompany them collectively and stop the forced eviction when needed. Another fundamental part of this Platform tactics lay in putting pressure on the politicians, giving visibility to the movement and the existing problems so that people can identify with them. Besides, the promotion of changes in existing legislation to guarantee the right to housing is part of their strategy, with the successful example of the law 24/2015 in Catalonia.

The conversation also included the perspective from local governments, with Barcelona's City Council approach on housing explained by Eduard Cabré, International Relations Consultant at Barcelona Housing Department. The tactics of the city include the pressure on national governments to guarantee human rights, the fight of crucial battles like forced evictions and the rent control, and pilot co-production solutions between governments and civil society groups. At a long-term level the city plans to bring housing up to the level of education and healthcare within the welfare state as well as to enhance the housing co-production (social production, public-cooperatives of housing, between others)

Lorena Zárate from the Global Platform for the Right to the City and former HIC President summarised the main ideas addressed in this panel highlighting that in the last 20 years, there were many very accelerated changes, and now more than ever the strategies used by social movements indeed to be combined “with the mobilization of public opinion, awareness raising and important training, even towards the institutions”. Lorena stated that the role of the public sector must be strengthened in a participatory and inclusive manner. According to Lorena, this is a discourse of political and public actors who have to commit more, because of the neoliberal mantra: “This must be changed urgently. The public needs to be re-imaginated”

A closer look at organisations and people producing housing rights

Yolande hendler, HIC Secretary General, facilitated the last subpanel to listen to the challenges that social movements and organization experience in their practices and how they affect on the ability to realise housing rights. Rose Molokoane from Slum Dwellers International argued that “we can’t do anything if we don’t look out for and support each other. In this sense she explained how the connections, networking and exchange programmes being used became a very strong tool to help and learn from each other and learn about different areas of operation.

The practices highlighted from Sonia Fadrigo on behalf of the Housing Coalition for Housing Rights (ACHR) in the Philippines include the importance of organising to have one single voice and to gather information, this helped them to reach the recognition by the government  and the use of the valuable information gathered for their participation in the housing and city design.

The Social Production of Habitat, a long-scope strategy, was explained by Silvia Emanuelli from HIC Latinoamerica. Silvia argued that the Social production is proposed as an alternative and viable product to the housing market that contemplates the participation of the inhabitants, an opportunity to build community and to focus on the collective production, that is often the only way to change things.

The last speaker, Léa Oswald from Urbamonde, explained the housing cooperative model. For Urbamonde “cooperatives are the main collaborative housing model, proven to be very secure and efficient and can be adapted to different contexts and needs”. This model includes mutual aid which means communities participate in building projects, building stronger communities, including also education and training through school of cooperatives.

The wrap-up of the second subpanel was conducted by Alexandre Apsan Frediani from IIED who highlighted the need to recognise diverse collective processes of producing housing as a mechanism to advance the right to adequate housing. He also called for reinvigorating the efforts of the past and the initiatives that policy and planning have brought about to support community-led processes because they are crucial for securing the right to housing in the future.

The closing remarks from Adriana Allen included the need to continue this conversation, highlighting the importance of strength alliances as a critical aspect to learn from the past and to move forward to witness the consolidation and emergence of multiple ways of activating housing rights as actual entitlements.