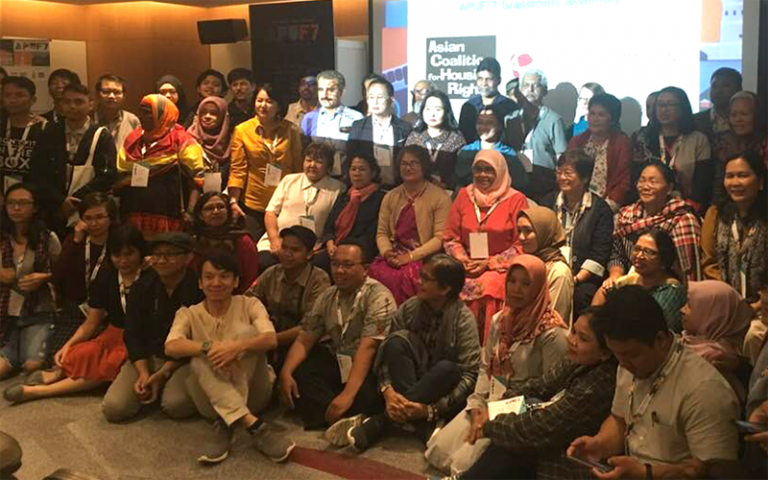 By Barbara Lipietz and Stephanie Butcher
Originally posted by KNOW

Held every 4-5 years, APUF is the largest regional gathering of its kind, focused on the identification of common actions and on building partnerships to achieve sustainable urban development. This year’s APUF coincided with the launch of the Future of Asian & Pacific Cities Report, outlining the four major developmental challenges faced by the region, namely: natural resource management, climate change, disaster risk, and rising inequalities.

ACHR involvement focused on forefronting community voices and experiences, drawing on the impressive range of innovations undertaken by grassroots groups across Asia in establishing collective land and housing, developing community financing sources, conducting vital data-collection activities, and forming strong systems of representation. The overarching message sent by these groups, along with partners from the SDI network, Huaruou Commission and WIEGO [1], is that the urban poor “are ready” to collaborate in the production of more equitable and sustainable cities. In the closing ceremony, Ruby Papeleras, representing the Urban Poor Coalition Asia (UPCA) raised the challenge to key urban stakeholders to work closer with grassroots groups, calling specifically for pro-poor policies, mechanisms for participatory planning, flexible financing systems, and access to land.

This session was the only one in the APUF conference which engaged directly with issues of urban inequality, despite its acknowledgment as a vital developmental challenge for the region. Presentations explored the drivers of inequalities in each city, and showcased the work of grassroots initiatives which have addressed these specific challenges.  It offered two overarching messages. Firstly, that tackling urban inequality (as a key component of sustainable development) requires the capacity to develop situated – or localised – diagnoses of urban inequalities in each city.  Secondly, it highlighted that there are already existing solutions, based on the enormous work of grassroots organisations. These solutions are often overlooked, despite the fact that they already are making cities more equal (and more sustainable) – often with very little support from those urban actors that have the power to bring about more structural change.

This discussion of alternative pathways to sustainable development is fundamental, amidst news that the Asia-Pacific is not on track to achieve any of the SDGs by 2030, with many goals showing little, or even negative progress. APUF therefore represented a valuable platform for grassroots leaders across Asia to network, represent their cities, and exchange knowledge on the various strategies, successes, and challenges they have faced in producing more inclusive, equitable, and sustainable cities.

Overall, these leaders offered a message of hope, identifying concrete pathways towards new Asian futures. They highlighted that change is possible, but that it must put those facing conditions of inequality at the centre. This requires a deep engagement with these lessons from the ground: exploring the mechanisms, processes, and actors which can support city-wide scaling up, and understanding equitable and meaningful partnerships as fundamental to achieving the ambitious aims of the SDGs.