The invitation offered Catalina Pollak Williamson (DPU MPhil) the opportunity to work with architecture students and explore new forms of community engagement through participatory tactics based on Critical Play, the subject of her research. 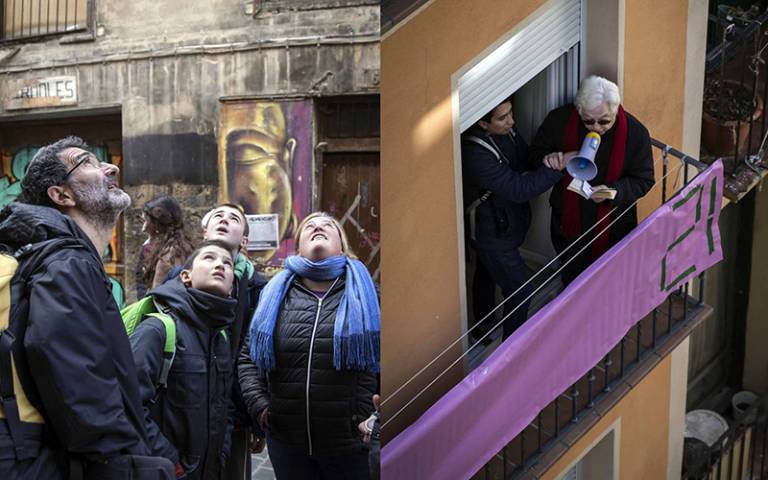 DPU MPhil student, Catalina Pollak Williamson, was invited to run the week-long workshop as part of the International Seminar of the University of Navarra in Pamplona, Spain. The workshop was titled The Gods: Dar Vida a Descalzos.

The gods is another term of denomination for theatre balconies. An analogy quite appropriate to describe the streets of Pamplona when transformed during times of Festival. Balconies are then traded, rented and used as a commodity offering prime views of the spectacle below. Mediating between interior and exterior space, the private and the public realm, balconies are a peculiar architectural typology charged historically with semiotic and political complexity.

The Gods: Dar Vida a Descalzos explores the potentiality of Pamplona´s balconies in the historic city center for becoming hybrid liminal spaces for community engagement, not only during festive times, but as part of the politics of the every day. Can the use of balconies offer a spatial typology for the rehabilitation of vulnerable social infrastructures in the historic town? What kind of urban intervention can turn balconies into a new form of urban space to bring connectivity and build collectivity amongst the historic quarter´s mixed community?

Based on the Urban Analysis of Vulnerable Boroughs in Spain and the PLANA Community Diagnosis of the Historic Quarter realised by the local community, the workshop addressed the conflicts and opportunities of Calle Descalzos, one of the most run-down streets in the historic quarter.

Using the balconies as performative spaces, the students engaged with the local community and facilitated the production of 25 different actions proposed by each one of the participating neighbours. The result was a participatory street choreography displaying an insight into the micro-politics of each neighbours’ particular identity: poetry reading, theatre performance, afro-dance, bacalao cooking, collective graffiti cleaning, and other forms of representation where chosen as forms of introduction. The idea of the balcony turned into a space of spectacle and play invited a different form of communication amongst neighbours, and in doing so, opened a space for dialogue aimed at boosting the sense of community, belonging and common care.