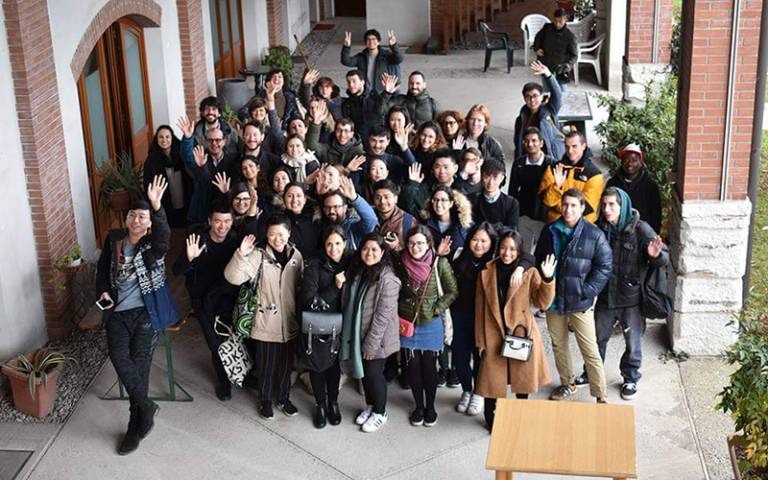 BUDD students are just back from a three-day immersive experience in the city of Brescia, Italy. The BUDDcamp is an integral pedagogical component of the MSc BUDD practice module where students and staff engage in learning in action experimenting urban research methods (walking and derive, performance, video, mapping) and participatory engagements with institutions, people and places aiming to develop collective strategies for just urban transformations.

Focusing on urban flows and politics of co-presence in the public transport space, this year BUDDcamp has interrogated urban mobility both as a fundamental need and as a right that produces stratified citizenship. Brescia is a small and over-infrastructured city. Spaces of transport are either abandoned and underused, or overcrowded and highly militarised. The form of the territory and specific policy have generated over time car dependency and car urbanism – but the car remains the form of transport for those who can afford it, excluding the migrants.

Within such a context, students have been asked to immerse themselves in a weekend long urban ethnography of transport mobilities being attentive to discourses, spatialities and the movement of bodies in space. Talking to transport users and collecting migrant stories, some groups have interrogated how to reactivate underused spaces to facilitate urban encounters, while others have focused on different rythms and speeds that negotiate intersubjective presence in the city; another group looked at how different systems of transport are either a cultural product and simultaneously a social and economic reproductor of inequality and gender discrimination within what has been termed ‘the tragedy of the commons’ (Fox, Ney and Verrucci, 2019).

Challenging the criteria according to which transport planning is deliberated, BUDD students have proposed new transport routes and modes of use based on what people value. Transport spaces are then turned into places where waiting and crossing is a form of encounter with the other, or where indifference, or to have it with Simone, the right to opacity, is ensured.