Congratulations to DPU student Ariana Markowitz was presented with the Crosby Hall Fellowship in Geneva on 25 July at the Centenary Celebration of Graduate Women International (GWI). 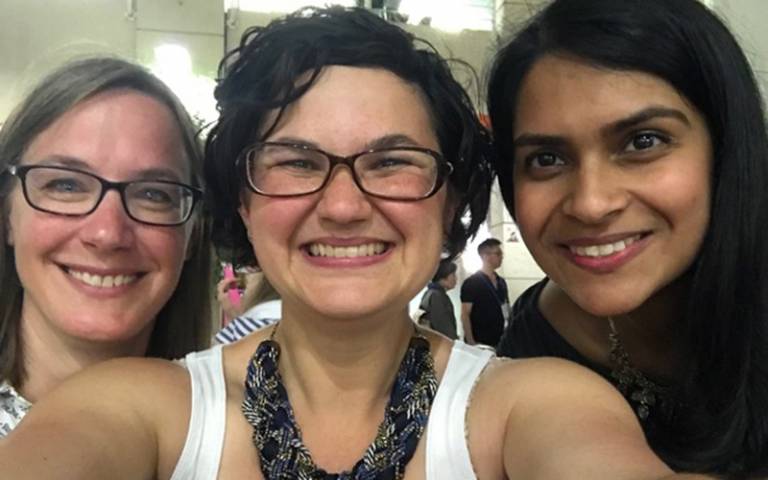 The Graduate Women International (GWI) is an organisation that advocates for the advancement of women and girls through education and training to enable their participation and leadership in all forms of public and private life. Some 400 delegates from countries across six continents attended the celebration, including from El Salvador where Ariana conducted fieldwork in 2018.

In line with the centenary theme of peace through education, the fellowship committee sought out applicants whose work revolves around conflict. Ariana’s research explores how fear and trauma manifest and become defining characteristics of cities experiencing extreme and chronic violence. Taking cues from this damage, especially in marginalised communities, she looks for alternative ways of repairing frayed social fabric and healing. The fellowship committee praised Ariana’s commitment to disrupting and dismantling violence and the grit, empathy, and creativity she displayed in the field under challenging circumstances.

The fellowship commemorates Crosby Hall, a historic building in Chelsea leased by the UK affiliate of GWI, the British Federation of University Women (now the British Federation of Women Graduates), from 1925 until 1986 when it passed to private ownership. The building included a hall of residence for women coming to study in London at a time when comparatively few women pursued higher education and socio-cultural barriers limited women’s mobility and independence. Crosby Hall took on added importance in the 1930s and 1940s as a home and refuge for German and especially German Jewish scholars who were forced out of Germany.

The fellowship is thus awarded to women doing doctoral research in countries other than where they normally reside or where they completed their first degree. As a result, the fellowship provides support to women who, because they have spent substantial time outside of their home countries, may encounter difficulties securing funding from government sources.