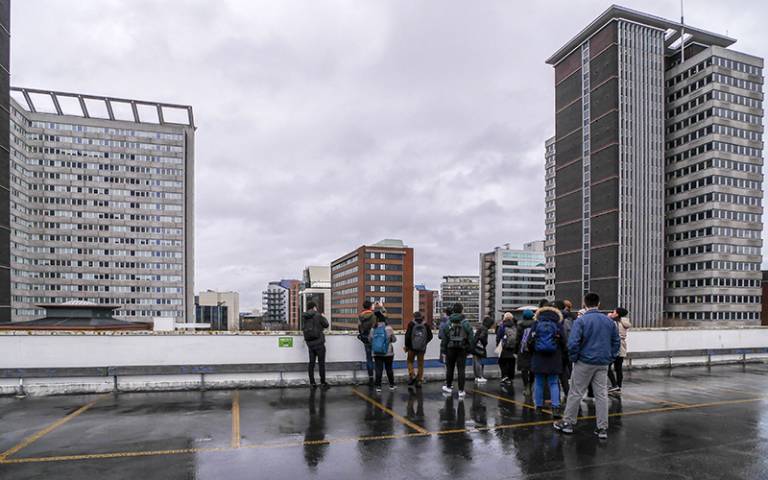 Croydon and Newham have been traditionally constructed as London’s marginal boroughs. Both areas have recently been object of massive investments. Croydon’s Old Town Centre – which in the last century had transformed into what is sometimes referred to in jest as the town’s ‘Mini-Manhattan’ – is being reshaped by a 495million pounds investment financed by the local Council, the Greater London Authority, Transport for London and the central Government. In Newham, the Royal Docks and Docklands have been experiencing massive redevelopment since the Olympics, with the local Council pushing a vision of high-tech research clusters, infrastructural modernisation, and new upper-middle class developments.

In both areas, local populations increasingly see themselves under threat and in the impossibility of benefitting from the recent transformations, which apparently fail to address socio-economic decline at the local scale. New housing, livelihoods and infrastructures remain mostly inaccessible to locals. In spite of discourses and visions fostering a rhetoric of centrality, both Croydon’s Old Town Centre and the Docklands still strive to emancipate from their marginal and impoverished condition. Huge pockets of abandonment and dereliction characterise their built fabric. The increasing flow of affluent newcomers contribute to exacerbate the polarisation and fragmentation of the areas’ social fabrics. Tangible and intangible boundaries emerge as results of dynamics of exclusion, privatisation, security obsession. Building upon DPU’s ethos and activities of public engagement, the students of the module Transforming Local Areas: Urban Design for Development (led by Giorgio Talocci and Camillo Boano) have researched such complex urban realities in collaboration with Croydon Council’s Place Department and the community-based group Royal Docks Community Voice.  For the first time, the urban design exercise was constructed across two distinct locales, putting forward a reflection on how the urban gets shaped in a multi-scalar fashion.

For 10 weeks, students have critically enquired such actors’ agendas and collected empirical evidence of the grounds of investigation’s dynamics of socio-spatial transformation, through a threefold perspective: the ageing city, the city of alterity, the city of boundaries. The outcomes of such urban analysis were presented at the Silver Building at the Royal Docks, receiving feedback from local groups. Students have then devised inclusive strategies of transformation for both grounds of investigation, tackling the participation and empowerment of local inhabitants. Such strategies were presented at the Croydon’s Art Studio in the Whitgift Centre – in the overall endeavour to (re)activate such fading landmark, today under threat of demolition.


Both Croydon’s Council Place Department and Royal Docks Community Voice are currently reasoning on how to implement some of the students’ ideas: we look forward to future collaborations, and thank Akil Scafe-Smith, Sarah Atkinson, Dan Daley, Tim Peake and all the people who collaborated in the exercise’s activities. A warm thanks goes also to our students, for their efforts and commitment in two challenging contexts.