Gender and informal livelihoods in Freetown

DPU and SLURC teamed up to run a capacity building workshop on ‘Gender Sensitive Informal Livelihoods Systems Analysis’ in Freetown. 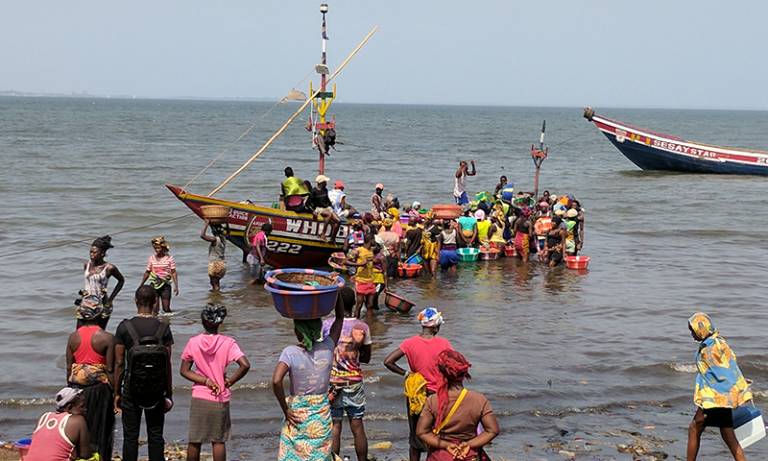 In February 2017, Andrea Rigon and Julian Walker worked with Braima Koroma and Sudie Sellu from the Sierra Leone Urban Research Centre (SLURC), to run a research capacity building workshop on ‘Gender Sensitive Informal Livelihoods Systems Analysis’, as part of the DPU’s ongoing collaboration with SLURC, funded by Comic Relief. The workshop was attended by thirty two participants, including residents of the four informal settlement communities that SLURC is undertaking research in, members of the Federation of Urban and Rural Poor – Sierra Leone (FEDURP-SL), staff from Freetown city government, government ministries and representative from NGOs working in informal settlements in Freetown.

During the workshop, pilot research was undertaken in two of the four informal settlements that SLURC is active in, both in the east of the city, namely, Moyiba, a hillside community, and Portee/ Rokupa, a coastal community.  The research focused on the key livelihood system in which the majority of residents are involved in each community: quarrying for construction stone in Moyiba, and; fishing in Portee/ Rokupa.

The workshop participants engaged enthusiastically with the research, and were able to highlight a number of findings. This included the gendered nature of the value chains, with mixed participation overall, but very distinctively ‘male’ and ‘female’ nodes. Another highlight was the importance of stone breaking and fishing as fall-back sources of income for those with few alternatives, as they are based on the use of freely available resources (access to both the stone quarry and fishing rights are open to all) and can be exploited by those with very limited assets. At the same time, the lack of social protection in these livelihoods systems was all too clear. The findings of this pilot research will feed into an ongoing research project on gender and informal livelihoods in Freetown.