DPU students lead the organisation of the DPU Walks series, an opportunity to explore and experience London while learning about four stages of development planning in central London. The first DPU Walk, an initiative developed and organised by DPU student, Nicolas Smith, took place this month, and set out to explore 'Critical London: from 40.000 bc to 2.050 ad'.

The initative organised by and open to DPU students was conceived as an exciting way to explore central London and give a first glimpse of the interaction and scale of development projects and approaches. It was led by Lester Hillman, a distinguished town planner, lecturer, academic advisor and accredited guide, and was also assisted by Nicole Badstuber, researcher in Urban Transport Governance in UCL and LSE and Gabriel Pizzolante, founder of Tech City Connect and organiser of Silicon Drinkabout. 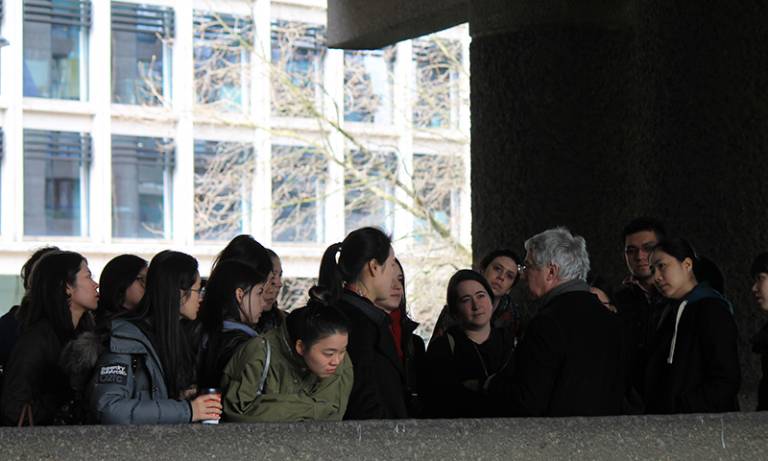 The Walk started in the Museum of London where 40.000 years of geological change, early settlements, roman, middle age, growth and death stories were unearthed. After visiting the expansion of the city during the imperial years, the group was led to the nearby modernist mix-use development of Barbican Estate, crisscrossing along the elevated paths and gardens.

Right across Goswell Road, the group discovered Farringdon Station where the Cross-Rail project and the rise of the area as a transport hub was envisioned and explained. Turning to the North-East, the group was escorted through medieval passages and Elizabethan layers until reaching the Old Street Roundabout, the epicentre of an organic clustering of tech and digital savvy enterprises: the East London Tech-City. The walk rested in a closure sharing drinks in the hype scene around Shoreditch.

The Walk was an exciting way to explore central London and give a first glimpse of the interaction and scale of development projects and approaches. The four stops strategy proved to be an interesting and dynamic way to set the differences between each kind of development.

A gallery of images from the walk is available on our Flickr channel here: