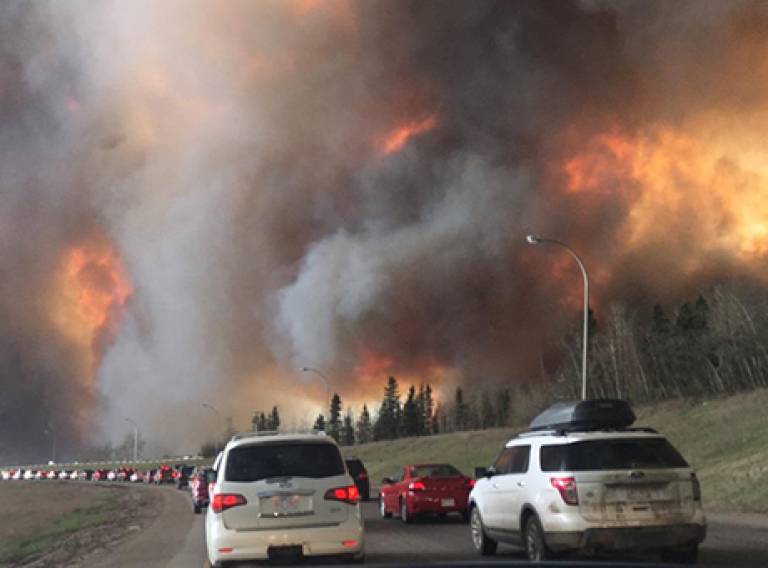 Throughout May 2016 massive wildfires have been sweeping through western Canada leaving behind a trail of devastation. Beginning just outside the municipality of Fort McMurray in Alberta, the fires have spread through the north of the province and into neighbouring Saskatchewan. To date, some 505,000 hectares of land have been burned, and around 2400 buildings destroyed. In the immediate aftermath the question of reconstruction and recovery is already being considered.

Within this context, the DPU’s Cassidy Johnson has appeared on the topical Canadian radio show The Current on CBC Radio One to discuss how cities rebuild after disaster. Cassidy’s research expertise and experience is focused on disaster risk management, recovery and reconstruction, and she has conducted extensive research on reconstruction efforts in cities around the world.

During the show Cassidy drew on previous research experience to offer an insight into the immediate steps that will need to be taken following the fires. The first issue to be considered is that once those who have been evacuated return, where and how will they be housed? Will they be placed in temporary housing, transitional housing or tents for example? Once everyone is initially housed and there are schools that children can return to, the second stage is to start to consider what kind of city people want to have going forward, and to initiate the creation of community and city plans.

Cassidy also drew attention to the fact that it is very common for society’s most marginalised groups to become further marginalised through post-disaster reconstruction. She suggests that disasters such as the wildfires in Fort McMurray can serve to highlight the cracks in society, and that “we have situations where those who are more vulnerable, or who were more vulnerable before the disaster, end up somehow often worse off after the disaster”. The issue of home insurance is one way in which this situation is manifested. There are cases where families may have owned a house prior to devastation but don’t have insurance and become caught in a gap. Cassidy argues that in the case of a lack of insurance we need other organisations to step in to fill the gap.

The chance to rebuild also provides disaster hit areas the opportunity to consider what needs to be done to help safeguard cities in the future. Cassidy maintains that it is crucial to incorporate community voices in reconstruction planning, to support local organisations, which inevitably do a lot of the work in supporting recovery, and to ensure that all residents have access to some financing that will go into the rebuilding.

The full show and transcript is available on The Current website here.