On Thursday 12 May Camillo Boano, MSc BUDD Director and Co-director of the UCL Urban Laboratory, spoke at an event in Rome organised by the association Temporiuso and the Italian Ministry of Culture and Heritage, General Directorate of Arts, Architecture and Urban Periphery, and chaired by Isabella Inti from Temporiuso. The event, titled “Periferie Pioniere: L’uso temporaneo come dispositivo di ascolto, innesco e accompagnamento della trasformazione” (Pioneer Peripheries: Temporary uses as dispositives for listening, triggering and supporting urban transformations), aimed to generate a dialogue between researchers, practitioners, activists and governments on the possible design strategies, tools, ethics and politics of the engagement with urban peripheries, suburban realities and marginalised urban voids.

The event stemmed from an exhibition organised at the Archivio Centrale dello Stato in Rome that exposed different models and examples of social housing and public housing investments in the 1950s and in the 1970s in Italy. The panellists - which included activists, architects, artists and curators - offered reflections around cases of temporary uses and civil activations in Taranto, Milan and Rome as well as very innovative examples of co-housing schemes and collective engagements in Milan (Officine Zoia). Discussions also reflected on the importance of arts and culture as activator strategies, as well as the central role of municipal programmes to allow new, temporary uses to return spaces to civil actions. The meeting, well attended by professionals, governments officials and architects and even DPU alumni, was an interesting opportunity to discuss the urgency to rethinking the nature of the suburban and exurban processes along with the categories of justice, inclusion and political responsibility. It also afforded the chance to reflect on the nature of use and usage to trigger new modes of appropriation of spaces and life shared, co-produced and negotiated rather than imposed by experts.

Camillo Boano talked on the use and ethics of architecture from the perspective of his research in Latin America, Middle East and South East Asia. He explored the role of collective actions specifically referring to the engagement with CAN and ACHR and his recently published works on periphery and use with Giovanna Astolfo "A New Use of Architecture. The Political Potential of Agamben’s Common Use" and "Speculations on the Italian rhetoric of mending peripheries. 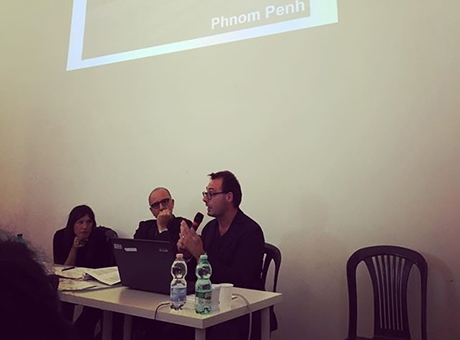