Social protection for inclusive development in the Afar Region of Ethiopia The ‘Social Protection for Inclusive Development in the Afar Region of Ethiopia (SPIDA)’research consortium, consisting of the Development Planning Unit with Adigrat University (ADU) in Northern Ethiopia, and the Pastoral and Environmental Network in the Horn of Africa (PENHA), has been working closely with relevant state and non-state actors including Samara University in the Afar Regional State of Ethiopia. The overall aim of SPIDA is to evaluate policies and practices already in place, such as the Productive Safety Net Programme (PSNP), and come up with alternative policy options to speed up the process of livelihood improvement among the pastoral communities in the Afar. The project focuses on designing ways to better achieve inclusive development through, among other things, social protection measures.

Having done some preparatory work in August 2015, the actual kick off for the project was held in September 2015 when the research team, led by DPU's Zeremariam Fre (consortium leader and principal investigator) and Dr. Zaid Negash (President of Adi Grat University in Ethiopia and second principle investigator), formally introduced the project to the relevant authorities in the Afar Regional State. In full consultation with the communities and their representatives, the project identified and selected possible research sites, conducted an initial literature review, developed participatory rural appraisal (PRA) guidelines, designed questionnaires and formulated a detailed operational action plan with clear terms of reference for all staff to be involved in the research in the first year. 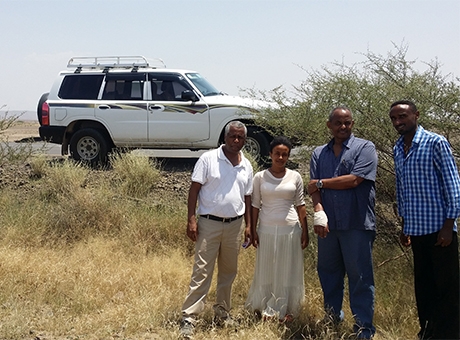 Using the PRA guidelines and associated research tools, the project has carried out three PRAs in three Kebelles (the sub-districts of Daar-Berhale, Urkudi-Abala and Bekelidaarna Abelidera-Mile) covering a wide range of perspectives and emerging livelihood trends in the pastoral, agro-pastoral and peri-urban communities in the Afar Region. Focus group discussions were held on issues such as pastoralism, agro-pastoralism, education, health, marketing, credit and cooperatives, social protection (traditional coping mechanisms as well as the PSNP), and gender. The project also made a seasonal calendar containing the associated health and food consumption related seasonal trends of humans and animals. Furthermore, the project drew trend lines on rainfall (drought), poverty and vegetation cover for a 50 year period. In addition, participatory wealth ranking and community problem analysis ranking were undertaken and an action plan developed. More than 70 people participated in these activities in the three sub-districts (55% men and 45% women). The Afar is predominantly patrilineal and women sometimes find it difficult to express their views openly in front of men; hence, to ensure women’s full participation separate groups were organized for men and women. Men and women were only brought together under one roof when the men allowed it, which was obviously a challenge for the team.

The field reports have been compiled and the team is now preparing for the next stage of qualitative data collection in the field. We are also drawing plans for the mid-term evaluation and related activities during the summer. We are happy to report that the research is going well, but the Afar communities, like so many others in Ethiopia and Greater Horn Region, are facing a serious drought, which is undermining their mainly livestock-based livelihood system and socio-economic-cultural assets, which is of great concern to our team.