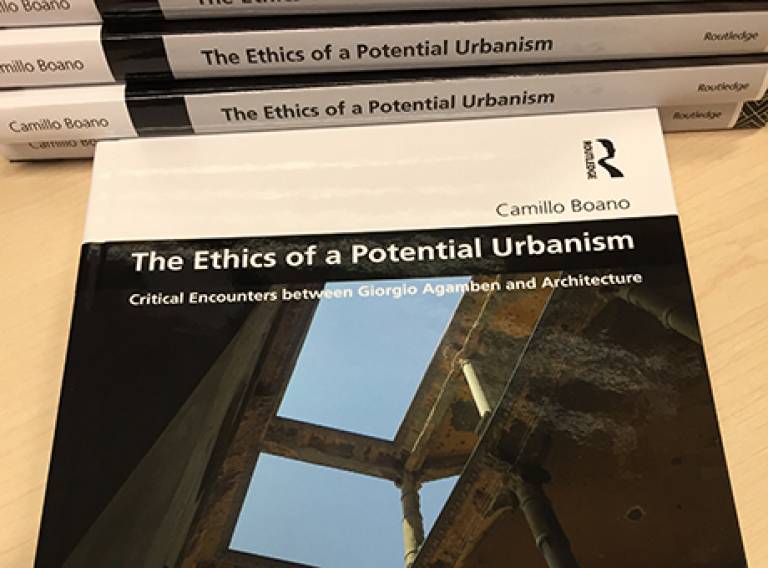 The DPU are delighted to announce the publication of a new book by Camillo Boano (Director of MSc Building and Urban Design in Development and Co-Director of UCL Urban Laboratory) titled 'The Ethics of Potential Urbanism. Critical encounters between Giorgio Agamben and Architecture'.

The book aims to bridge the gap created by the 'missing encounters' between radical philosophy, urban design and architecture, highlighting the substantial possibilities of Giorgio Agamben's work for a renewed perspective on architectural and design practice in a time of neoliberal consensus and uncritical acceptance of the nature of life and society.

The monograph traces the main features of an 'inoperative architecture' a 'destituent' way of dealing with urban design. Theorising with and through Agamben has helped provide a manner of looking at urban and spatial practices and a way of framing and understanding what is not simply instrumental but political and ethical; opening the possibility to determine counter-practices while being able to see architecture and urbanism under a renewed orientation and perspective.

The book investigates the ways in which design practices in different parts of the world have to reconcile the current separation of urban design from radical thought - one that has happened either by ditching theory altogether, or by simply hiding in a formalist, autonomy-narrowing urban design, with a design mission that adheres to uncritical acceptance of the status quo. The monograph sits in Camillo's current research on asserting Urban Design as an expanded, critical and theory driven practice, through pedagogical innovation, action research and a creative use of theory.

The book is published by Routledge and is avalable here in hardback and as an ebook. The paperback edition will be published in 2017. 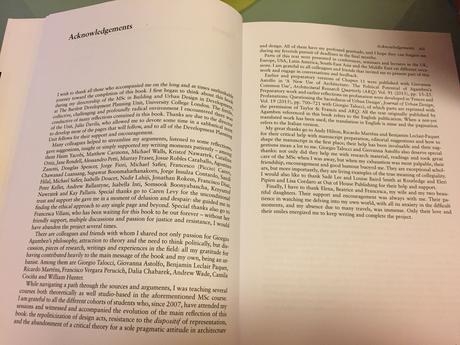 Below are a collection of endorsements received for the book.

This book offers more than an original contribution to the field; it opens a true debate that can no longer be ignored (Francesco Careri, Roma Tre University)

This book examines the relevance of Giorgio Agamben's political writings for architecture and urban design and carefully guides the reader through Agamben's fascinating ethical and political vocabulary. The book rethinks notions such as use, productivity, and creation that are, in the design disciplines, often taken for granted. It recognises, perhaps provocatively but convincingly so, in 'inoperative architecture' a genuine route towards a political and ethical design practice. This book offers a timely contribution to the debates on the social responsibility of architectural and urban design, and a must-read for scholars interested in the emancipatory and transformative agency of design (Isabelle Doucet, The University of Manchester)

For all those of us concerned with a truly alternative project for architecture, Boano's work is not only enlightening but also timely. His reading of Agamben from an architectural point of view certainly goes beyond proposing the paradox of making philosophy operative by rendering architecture inoperative: it also sheds light on a possible way out of the anti-intellectual trend that pervades contemporary architecture. Instead of a new style or another slogan to feed the industry of architecture, Boano's proposal looks for a renewed ethics which, precisely in a discipline that forgot about this word, will surely open up unexpected and yet amazing new avenues for architectural debate (Francisco Díaz, Professor at the School of Architecture Universidad Católica de Chile and Editor in Chief of ARQ Magazine, Santiago, Chile)

The Ethics of a Potential Urbanism is a fascinating attempt to invigorate politically engaged architectural discourse - both as a theory and as a practice. The aim of the book is to use Giorgio Agamben philosophical project focused on an idea of radically emancipatory 'being inoperative' as a project of a new (post-capitalist?) architecture. In a context of architecture and urbanism this perspective opens possibility of a (absolute?) freedom, allowing to reject hyper-pragmatic language of capitalism (but also dated state socialist model - based on Fordist model of production). The book is a promise of new model of community and relationships between language, rules and life (Krzysztof Nawratek, Senior Lecturer in Humanities and Architectural Design, The University of Sheffield)

How can architecture deactivate its preoccupations with "the arrogant ego of creative power" and be of use for an urban life without a final destination? This is the question addressed in this most erudite and inventive mobilization of Agamben's work. Boano takes a major step in rendering inoperative the prevailing suppositions and practices that keep urbanism from being something else, now (Abdoumalique Simone, Max Planck Institute for the Study of Religious and Ethnic Diversity).