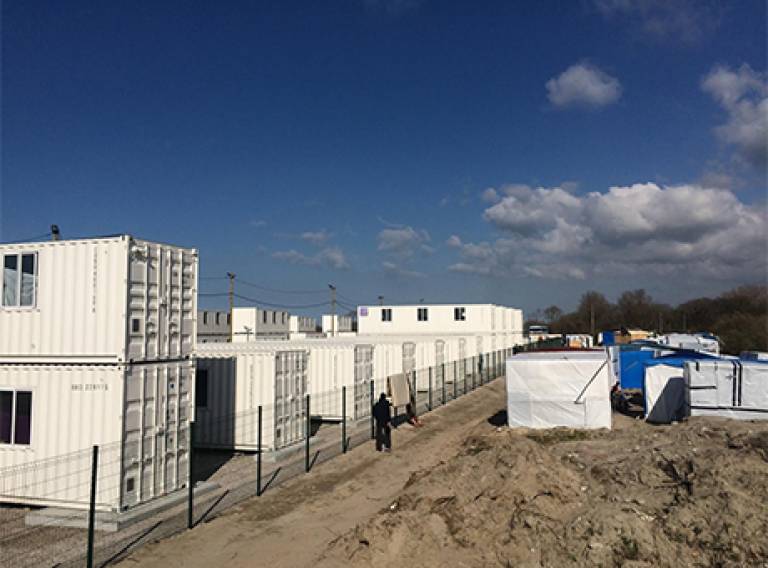 Makeshift camps, created in various and dynamically changing locations across Europe (near and within cities, ports, forests, borders), have become an integral part of the so-called current refugee crisis. Amongst these, the Jungle refugee camp in Calais, northern France, has become an internationally recognised hotspot, attracting media attention due to its proximity to the Eurotunnel and the conflictive relations between the refugees and the French authorities. These reached a climax at the beginning of this year, with brutal evictions, the bulldozing of nearly half the camp, and multiple legal confrontations between the local prefecture and the organisations cooperating and resisting in place (NGOs, volunteers, activists).

Last week, a group of researchers from UCL (Giovanna Astolfo - Teaching Fellow and Ricardo Martén PhD Researcher at DPU, Akil Scafe-Smith – architecture student at The Bartlett), set out to develop a preliminary research on borders and camps led by Camillo Boano and conducted with the support from the Urban Transformation and Social Diversity clusters at DPU, and with the participation of Irit Katz, a research associate from the Department of Architecture, University of Cambridge. As part of the initial approach the team met representatives of several organisations actively running and operating different activities in the Jungle of Calais and Grande-Synthe in Dunkirk. These included members from l'Auberge des Migrants, Help Refugees, Care for Calais, La Vie Active and Médecins Sans Frontières. We are grateful for the workers and activists of these organizations for dedicating part of their limited time and for sharing their experiences with admirable honesty and introspection, from which invaluable insights have been gained.

Out of this preliminary visit, which included an exploration of the camps as well as detailed conversations with the aforementioned groups, several elements emerged that will inform research agenda and future development. The first is the understanding of the continental scale of the current migratory wave. The camps visited in Calais and Grande-Synthe are not isolated camp realities but rather part of a fast evolving geography of heterogeneous camps spanning across European borders. Secondly is an understanding of the heterogeneity of the multiple practices of humanitarian aid in place, ranging from small activist groups to international professional organisations, with different strategies and levels of specialisation.