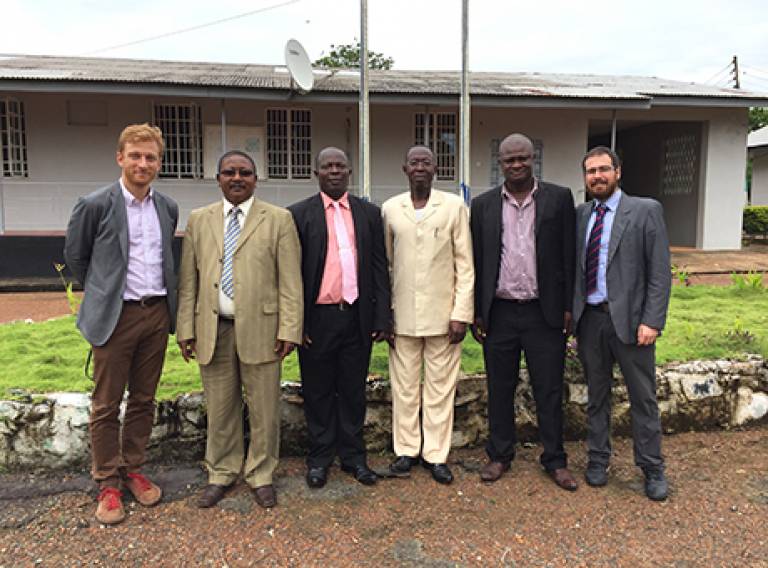 The end of October marked the start of activities at the Sierra Leone Urban Research Centre (SLURC). The core team made of the two co-investigators from DPU, Alexandre Apsan Frediani and Andrea Rigon, the co-directors Joseph Macarthy and Braima Koroma from Njala University, and the Project Manager Ibrahim Bun Kamara worked intensively in Freetown.

The team held meetings with the Njala University management who emphasised the strategic importance of this partnership. On behalf of the Vice-Chancellor, Aly Turay, the University Registrar, warmly welcomed us (speech available here). In an open seminar at the Institute of Geography and Development Studies, the team also presented the work of the DPU and UCL and introduced SLURC. Academics from various disciplines expressed their willingness to be involved but also the desire to explore broader collaboration opportunities with UCL, including around PhD training. The visit included interviews at the radio station of Njala University.

In Freetown, the team held a workshop with the staff of NGOs working in the informal settlements who are implementing projects under the programme’s four cities initiative funded by Comic Relief. These include YMCA, CODOHSAPA, BRAC Sierra Leone, the Youth Development Movement, and Restless Development. The workshop identified the key issues affecting the well-being of people living in informal settlements and gaps in knowledge that could be addressed by research coordinated by SLURC. The issues were grouped around five interlinked areas: profiles of informal settlements; urban vulnerability and resilience; land and housing; urban livelihoods and city economy; urban health. Issues emerged included: flooding and how discourses of risk are used to justify relocations; the way in which relocations affect livelihood opportunities; lack of knowledge on land dynamics, policy and planning; and the nexus between health, livelihoods diversification and housing. The activities also involved building a shared vision for the centre and plan of the first year of activities which will include the recruitment of key staff, the official launch of the SLURC on the 27th of January, a meeting of the International Advisory Board and the delivery of training on urban research methods. The team also looked for a suitable location in Freetown for the new centre.

To follow up further activities of SLURC, check out the project’s micro-site: