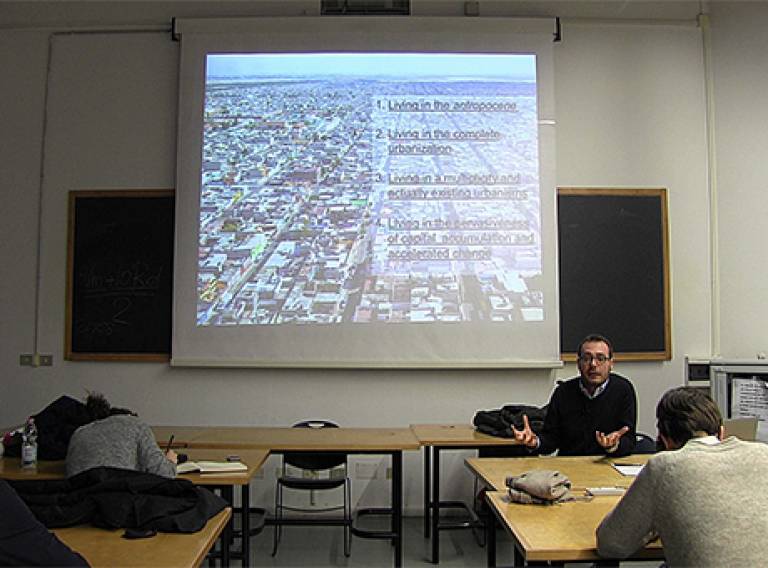 The DPU’s Camillo Boano, MSc BUDD Director and Co-director of the UCL Urban Laboratory was invited to participate in a workshop organised by UNIVERSUD and the Faculty of Architecture at the University of Ferrara titled “Limiti Urbani/Urban limits” between 25-28th November.

The workshop began from the premise that the city, historically, can be considered the place where people organise themselves collectively in order to achieve better a good way of living. However, the current process of urbanisation and the creation of urban space is often formed with exclusionary and predatory principles that forget the centrality of people-centred development. “Limiti Urbani” sought to question whether the spatial, social or legal integration and recognition of marginalised parts of the city should be considered a prerequisite for the sustainable future of urban societies, even if only from an economic standpoint and development. The workshop was organised by a several students of the Faculty of Architecture and brought together more then sixty participants from different backgrounds.

Camillo participated in studio works and design research seminars that focused on cases of informal urbanism and urban limits in Buenos Aires and Mexico City. Camillo also delivered a talk titled "The civil disobedience of design: an architectural research agenda for the unjust city” that stimulated the debates around the role of design and the ethics of architecture in co-producing urban knowledges. Along with Camillo DPU friend Marcello Balbo from IUAV and Romeo Farinella (UNIFE) and many other speakers were involved.

Camillo’s talk was aimed to provoke a reflection around the role and the limits of design and design strategies in addressing marginalisation, exclusion and informality, and specifically to reflect on the current social turn in architecture and the possible limits of a solely pragmatic approach. It highlighted the substantial possibilities of civil disobedience for a renewed architectural and design practice in a time of neoliberal consensus and un-critical acceptance of the nature of life and society in the global south, and drew on the experiences and praxis developed over several years of action-research as well as his pedagogical experience in the MSc BUDD.

The talk stimulated an interesting debate around the multivariate forms of socially relevant architectural practices. This marks a departure away from the market driven and aesthetic logic that dominates the current architecture’s mode of practice and the architectural school curriculum which might require updated and innovative approaches, situated and participatory practices, as well as a more central attention to global urbanisation issues.