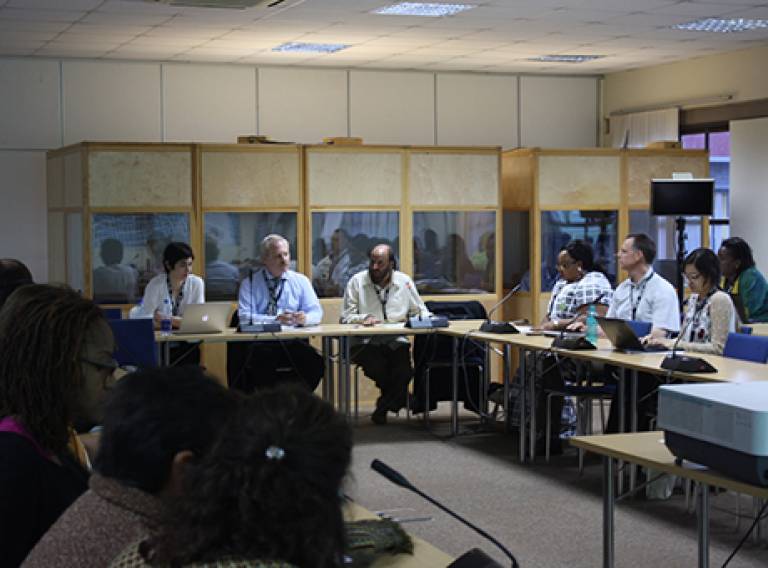 The second session of the Preparatory Committee of the United Nations Conference on Housing and Sustainable Urban Development (Habitat III) is convening this week in Nairobi. Habitat III, which will take place in Quito in October 2016 intends to outline a “New Urban Agenda”.

The side event included a number of presentations:

(a) Civil society and local governments’ expectations and proposals for the New Habitat Agenda and Habitat III and the legacy of Habitat II.

(b) Outcomes of the research "Habitat III National Reporting Processes: Locating the Right to the City and the Role of Civil Society", presented by Barbara Lipietz and Rafaella Lima from the DPU.

The DPU has been proactively engaging with the Habitat III process through our research into the national reporting processes, which was first presented at the World Social Forum in Tunis in March.

Last week, in the build up to the event in Nairobi we also hosted a roundtable in London in collaboration with BSHF (Building and Social Housing Foundation) to elaborate understandings of the right to the city and aspired outcomes in the months leading up the Habitat III.

A number of recommendations for Habitat III emerged from discussions at the event, including:

A joint platform on the right to the city?

In addition, participants affirmed the value and need to continue working on a joint platform to strengthen civil society and local governments’ voice in Habitat III - which is currently seen as a step back from Habitat II’s more open process of formulation.

There was general enthusiasm for the Global Platform for the Right to the City to act as one such conduit.