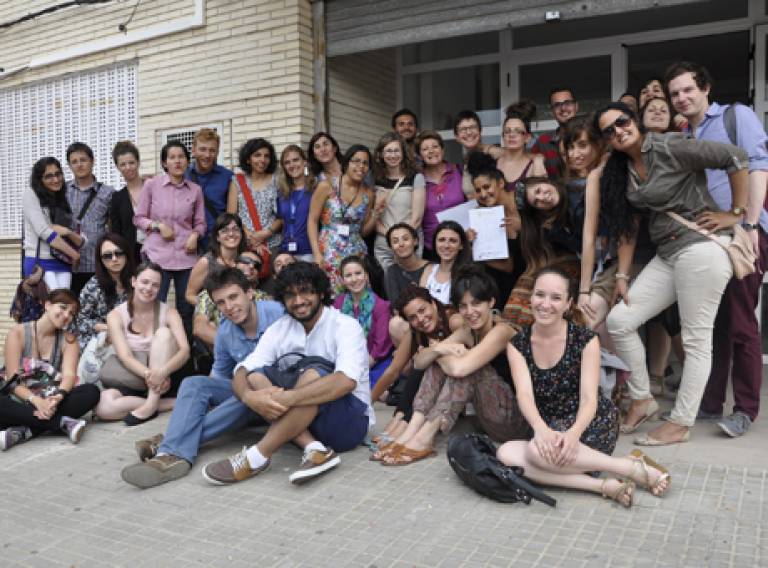 The DPU has been involved in a 2-week summer school (2-13 June) on Human Development and Participatory Research Video bringing together students and staff from 7 European universities exploring wellbeing issues in the neighbourhood of San Lorenzo, in the Spanish town of Castellon.

The summer school consisted of a series of lectures on human development, participatory action research and video-making, as well as hands on engagement in the neighbourhood of San Lorenzo with residents and social workers.

While San Lorenzo has been targeted by many social projects, it still remains highly stigmatized as a place of marginalization and conflict between ‘gypsies’ and ‘non-gypsy’ residents. The neighbourhood has been also source of many innovative initiatives led by the local social workers team and Universitat Jaume I, that has been working on issues of gender and youth empowerment and social inclusion. As a result of such engagement, a structure of representation was created to facilitate coordination among different initiatives and improve the dialogue between local residents and government actors called ‘La Taula’. However, the context has become particularly complex recently, as the current Spanish economic crisis meant that local residents have been facing an uncertain economic environment while the government has been under pressure to reduce costs leading to cuts to social projects as well as the potential threat of privatization of the social housing stock.

In this scenario, the workshop partnered with La Taula with the aim to explore the wellbeing of local residents and produce videos that fed-into their activities and dialogue with wider governmental authorities. The videos produced reveals local aspirations and potentials for change, which aimed at giving visibility of the positive local practices, fostering dialogue between different social groups in San Lorenzo and contributing to address stigma from actors and residents outside the neighbourhood.

Gynna Millan, an MSc BUDD Alumna and former Media Coordinator at the DPU, and lecturer Alexandre Apsan Frediani contributed their experience in using video-making in action learning projects. The summer school also drew on the work of the Masters programme in Social Development Practice on issues of wellbeing and citizenship in urban areas, and involved 5 of its current students and the new external examiner of the programme, Alejandra Boni, from the Universitat Politecnica de Valencia.

This collaboration was funded by the Lifelong Learning Programme of the European Union and involved 2 staff members and 5 masters students from each of the partner universities, which apart from the UCL, included the Universitat Jaume I, Universitat Politecnica de Valencia and Universitat de Valencia from Spain, University of Bath from the UK, Universita di Pavia from Italy and Universitatea de Vest Timisoara from Romania.