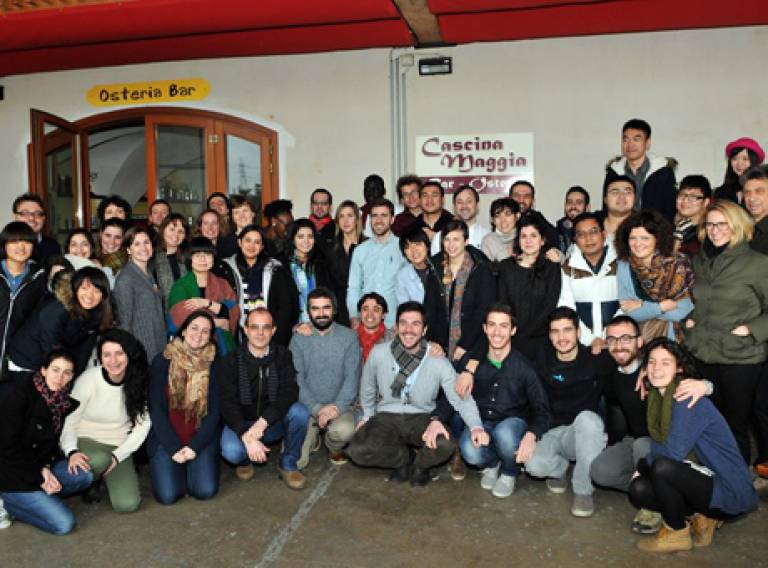 The MSc Building and Urban Design in Development students and their tutors Dr. Caroline Newton, Jennifer Cirne and Dr. Camillo Boano, took part in a three-day research design exercise in Brescia (Italy) working in partnership with the Municipality of Brescia (Comune di Brescia) and the Local Democracy Agency Zavidovici – LDA, (Associazione “Ambasciata della Democrazia Locale a Zavidovici” O.N.L.U.S. Impresa Sociale). LDA works with refugees and immigrants in the urban territory. During the three-day design workshop, students immersed themselves in five sites in the city of Brescia.

Two of the sites were illustrations of the impact of the PCB pollution the city is confronted with. The polluted park in Via Livorno is surrounded by high-rise developments and family houses and neither the local government, nor the inhabitants of the area really know how to deal with the existing pollution. The second site, a former elementary school "Vito Dusi" on Via Villa Glori, the students suggested to redevelop the building not only to house the new headquarters of LDA, but also as a venue for raising the awareness of the inhabitants of Brescia about the PCB pollution and its consequences. The location is of specific importance for this campaign as it is located in the middle of the abandoned area of the ex-Caffaro (the factory responsible for the pollution).

Another group of students went to the neighborhood of San Polo, a typical modernist development and the most populous sector of Brescia with nearly 20 000 inhabitants. It was built during the ’70s and designed by one of the most prominent Italian architects, Leonardo Benevolo according to the mantra of the "tower in the park”.

Two other groups worked with two initiatives of LDA that focus on the integration and training of immigrants. Ciclofficina, in the city centre, is a social cooperative that offers cycle repairs and sells bicycles, and the second initiative a carwash on Viale Venezia offers high quality services.

Provoked by a critical and creative reading of the ‘Six Memos for the Next Millennium’ from Italo Calvino and topical design briefs, students were encouraged to explore possible catalytic and strategic interventions that highlight, mobilise, and/or transform existing social activity in that specific locale aiming to develop transformative potentials for an inclusive city. The local newspaper reported on the research exercise and the public engagement at http://www.bresciaoggi.it/stories/Cultura/643917_londra_ridisegna_brescia/