The DPU has been playing an active role in the collaborative research project ‘Epidemiology, ecology and socio-economics of disease emergence in Nairobi (i.e Urban Zoonoses)’. 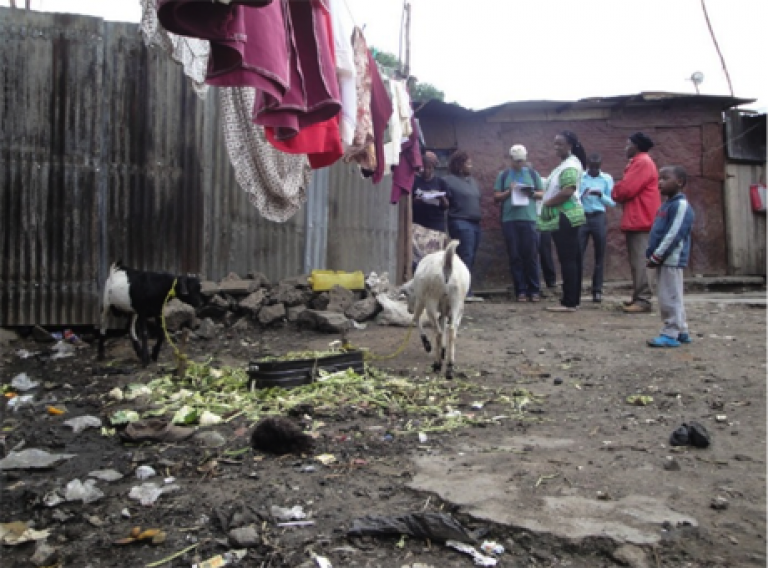 Our most recent practical involvement with the project saw Director Julio D. Davila and Research Associate Sohel Ahmed travel to Nairobi, Kenya in November 2013 to further discuss cross-cutting themes in understanding the role of urbanization in the emergence of zoonotic pathogens in cities in the global south.

The Urban Zoonoses project is an inter-disciplinary approach to understanding the spread of pathogens amongst rapidly growing urban and peri-urban populations in Africa. The project focuses on urban livestock (within its socio-economic context) as the source of such pathogens and thus brings together concepts and experts from the fields of epidemiology, public health, microbiology, veterinary science, economics, urban planning, social sciences, and international development. During a two-day workshop in Nairobi Julio and Sohel joined participants from several partner institutions including James Akoko, Catherine Linard, and Professor Eric Févre. These talks covered topics including fieldwork challenges such as occupation and security, microbial data and its public health implications, urban growth models for parts of Nairobi, framework and methods, and community mapping.

Fieldwork and activities began towards the end of the workshop and continued in Kenya over the next ten days. Members of Urban Zoonoses travelled to Viwendani to observe livestock keeping practices and the range in size of cattle farms. The groups also visited lab facilities in KEMRI, where most of the lab tests for the project are being conducted, and Sohel led discussions over methods for profiling informal settlements in Nairobi. Before leaving Kenya, partners conducted a pilot mapping exercise with a federation of Slum Dwellers (Muungano wa Wanavijiji) and the Muunganno Support Trust (MuST) in a village in Mathere.

The project was initiated in 2011 and continues. For further information, and for project updates follow the project on Twitter: @ZoonoticDisease

You may also be interested in two further 'blog' entries from David Hutchinson, Environment and Health Science Coordinator for both the EEHI and ESEI programmes, on the project meeting and latest project newsletter: http://eehiesei.wordpress.com/

The Urban Zoonoses project is funded by the UK Research Councils and the UK Government’s Living with Environmental Change Initiative and is coordinated by the University of Liverpool and Kenya’s International Livestock Research Institute. The Development Planning Unit remains involved in the project and its research.