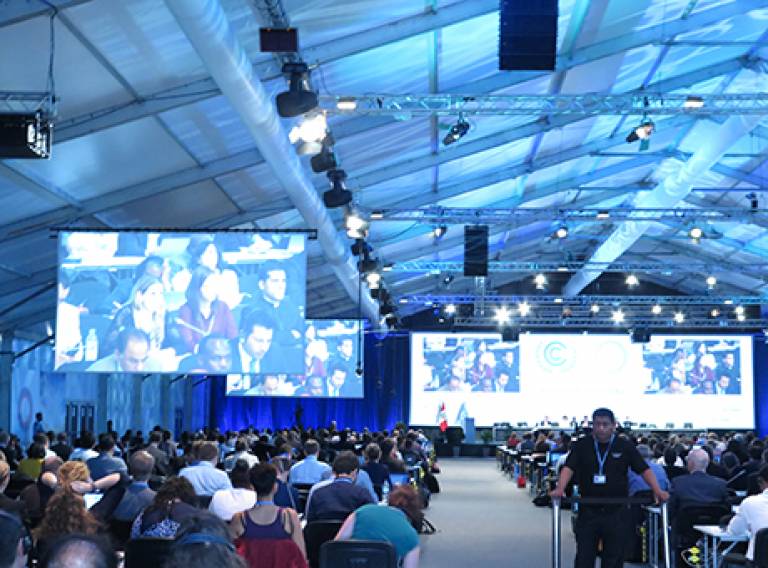 The 20th Conference of Parties in Lima represents the latest attempts by national governments from across the world to define a common purpose, enshrined in legislation, to combat the growing perils of climate change.

Multiple and parallel debates have been taking place in Lima, not limited to the policy-level discussions that have been widely reported in the international media. Professor Adriana Allen of the DPU has been representing UCL at the conference.

She describes the COP as "the usual - or perhaps intensified - wrestling between the 'north' and the 'south' on responsibilities, required actions and their finances. The outcome was disappointing by all standards, an agreed document that in short, says 'those wishing to combat climate change might undertake any measures of their liking in their own time.'"

Are we always looking to the next summit?

It has been suggested that essential building blocks have been established ahead of the COP21 summit in Paris next year. Is there not a clear (and indeed recurrent) danger that we are forever looking to the next deal, while the event horizon of irreversible climate change creeps closer?

"Ambiguity dominates in almost every statement of the 'deal' agreed, making the road to Paris even longer than before talks in Lima," reflects Adriana. Despite this pessimism, she did witness many positives that offer pathways towards progress.

A call for climate justice

"The People's Summit provided the opportunity for different voices under a call for climate justice. While the glue articulating different claims might be short-lived, the summit was effective in giving high visibility to the relationship between climate change and environmental justice and how both intersect the rights of ordinary women and men both in cities and rural areas."

Given that the realities of climate change are manifest at the local level and impact people’s everyday lives, the relevance of national-level policy discussions might be called into question in any case. So where might change be found? Vanesa Castán Broto, Senior Lecturer at the DPU, has recently co-authored a book, An Urban Politics of Climate Change, which focuses precisely on innovations by groups and individuals, often independent of policy frameworks. An open forum for citizens

The DPU had a presence throughout the summit in the Voices for Climate fair, where we opened a forum for citizens of Lima to talk about how everyday risks – exacerbated by climate change – are produced, experienced and tackled.

We ran a series of events alongside our Peruvian partners Foro Ciudades para la Vida, Centro de Investigación, Documentación y Asesoría Poblacional (CIDAP), El Instituto de Desarrollo Urbano (CENCA) and various neighbourhood organisations. These group are brought together in the Learning Lima initiative: visit the website for more on the research and activities at COP20.

Progress, it seems, is still in process.