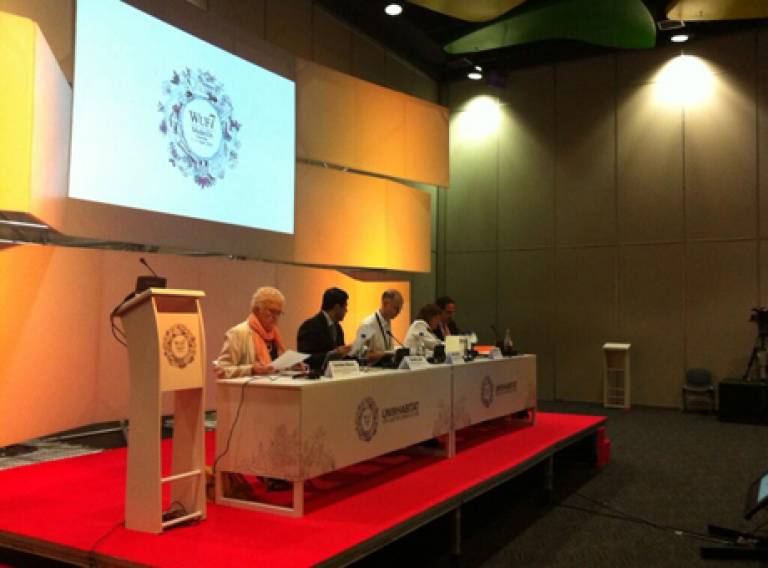 The Forum marked a significant point on the route to ‘Habitat III’, the UN conference on Housing and Sustainable Urban Development, which will take place in 2016 and is expected to set the tone for urban development planning for the next 15 years.

Over the course of 7 days 18,000 people were present in Medellin, at one of the largest urban-focused gatherings on the planet. Representatives from government and international agencies sat in discussions alongside representatives from academia, NGOs and civil society groups. 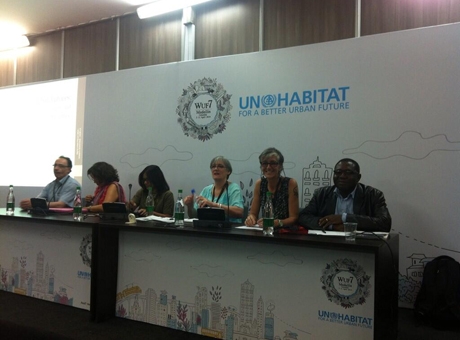 The first DPU-led event was a networking event on ‘Just Urban Futures: Dialogues between Resilience and Environmental Justice’. In the face of increasing international pressure to increase resilience the session sought to explore whether this drive towards greater resilience actually undermines or enhances peoples’ environmental justice. Is it possible to achieve both resilient and more equitable and sustainable urban futures?

The session was chaired by Caren Levy and featured speakers from Africa, Asia and Latin America, relaying their experience of resilience practice and thinking. They included: Andrea Lampis (Universidad Nacional de Colombia); Mtafu Manda (Mzuzu University, Malawi) talking about urban water, the MDGs and government policy in Malawi; Huraera Jabeen (Population Council, New York and BRAC) sharing her research on low income settlements in Dhaka, Bangladesh about trajectories reflecting the accumulation of different kinds of assets as indicators of individual and collective resilience; Liliana Miranda (Executive Director, Foro Ciudades para la Vida, Peru) exploring the challenges confronted in light of different climate change scenarios by the second driest city in the world and the way in which formal and informal urban planning can respond to these; and Adriana Allen (DPU), inviting the audience to reflect on the impact of WUF as a powerful site where a global community of practice comes together shaping debates on how urbanisation works and should be, and in the process endorsing the mobility of certain notions while dismissing others. This opened up wider debates on how and why the notion of urban resilience has received substantial traction in recent years – as reflected in its use throughout the forum. Respondents Barbara Lipietz and Liza Griffin added their thoughts to the conversation, as the lively plenary discussion considered how an environmental justice discourse might play an import part in contributing to resilience thinking in theory and in practice.

The second session convened by the DPU saw the book ‘Urban Mobility and Poverty: Lessons from Medellin and Soacha, Colombia’ launched by editor Prof Julio D Davila. This resounded strongly with many attendees as it focuses heavily on the case study of the Medellin Metrocables. The session also featured comments from Caren Levy and DPU Alumna and former research assistant Diana Daste, who discussed the research findings that feature in the book, alongside comments from our Colombian research partners, Peter Brand and Ivan Sarmiento, Universidad Nacional de Colombia (Medellín campus), Jose Fernando Angel (former Secretary of Mobility of Medellin) and Juan Pablo Bocarejo, Universidad de los Andes in Bogotá. The event was important in giving visibility to the key findings generated by the ESRC funded research project and sharing them with local and international policymakers. Julio also took part in numerous other sessions at the Forum including a session on the Challenges and Opportunities in Capacity Development of Cities and Local Government, hosted by the World Bank and UN-Habitat, an urban researchers roundtable on urban equity and the development agenda convened by UN-Habitat, a researchers’ dialogue at Museo Casa de la Memoria organised by Universidad Nacional de Colombia (Medellin campus), and an event entitled 'Inclusivity: an Urban Challenge', put on by the UCL Alumni Association of Colombia, which took place in Bogota in the week preceding WUF. Elsewhere DPU staff had important inputs into a number of other events.

Caren Levy was a presenter in the Networking session on ‘Gender, Asset Building and Just Cities’, chaired by Caroline Moser, University of Manchester, with support from the Ford Foundation Just Cities Initiative, New York. Focusing on the gendered nature of asset building and what this brings to the goal of achieving just and more equitable cities, the session was structured around a panel sharing conceptual frames, experiences and practical ways forward which may allow women to not only empower themselves, but also to successfully challenge power relations in a transformative manner. Other members of the panel included: Sonia Maria Dias, WIEGO, Brazil; Huraera Jabeen, Population Council, New York and BRAC; Catherine McIlwaine, Queen Mary University of London; and Bathsheba Tatenda Biti, Director Dialogue on Shelter, SDI, Zimbabwe.

Alexandre Apsan Frediani delivered a session with Beatrice De Carli (ASF-UK and Sheffield School of Architecture, University of Sheffield) and Matthew French (UN-Habitat Afghanistan) which was organized by Architecture Sans Frontieres UK. This took the form of an interactive discussion on Participatory Design and Planning for Equitable Cities featuring smaller group activities, each of which were instigated by inputs from one of the session partners. These were: Development Action Group, a South African NGO, MOM (Morar de Outras Maneiras), a Brazilian research group within the Universidade Federal de Minas Gerais, and the faculty of architecture of Universidad La Gran Colombia. A lively discussion on the tensions around participatory design represented a development in the conversation from previous editions of the WUF, which has further consolidated this network of people and groups working on the issue.

A networking event, hosted by Ramin Keivani from Oxford Brookes University, focused on examining the urban legacy of mega events, with contributions from Nicholas You (World Urban Campaign), Adriana Allen (DPU), Edmundo Werna (International Labour Organisation) and Demian Garcia Castro (Federal University of Rio de Janeiro and Popular Committee of the World Cup and the Olympics). With reference to specific case studies, the panellists put forward different hypotheses about the urban legacy generated by mega-events, ranging from the comparative lower impact and longer lasting benefits of world exhibitions, the leveraging effect that mega-events might have to improve labour conditions and the processes of evictions and gentrification. Drawing on two research projects conducted by DPU staff and MSc students in recent years (Whose Olympics? and Justice in the Green), Adriana Allen reflected on the articulation of the London Olympic legacy in relation to open public spaces, and how this obscures the everyday appropriation practices of ordinary citizens while acting as a justification to enforce fast track interventions, normalising a state of exception planning practices and facilitating potential land grabbing processes. The inputs from the panellists were followed by a lively discussion which related to various mega-events hosting cities

A session convened by ITACUS (ITA Committee on Underground Space) entitled ‘Towards Guidance on Innovative and Socially Just Urban Planning For Disaster Resilience’ was attended by Barbara Lipietz who joined a panel alongside representatives from UN-Habitat and the University of Twente. The panel discussion followed talks on experiences from Dar es Salaam (Tanzania), Hoboken (USA) and Barcelona (Spain) on mainstreaming DRR policies in their cities’ urban planning. The debate pitted technical means against pro-poor knowledge co-production in building resilient cities, and discussed the characteristics planners and governance institutions in the future require to effectively implement change.

DPU in the Media Julio D Davila and Camillo Boano featured in one hour-long interviews on the national television channel Canal UNE, on issues such as transport and urban conflict reflecting on the dramatic success of the city of Medellin in addressing the urban violence through an urban project that reconciled public spaces with transport hubs and areas of cultural significance. Lively debates were had alongside architects, planners and majors (including Antanas Mockus, a former Mayor of Bogota). 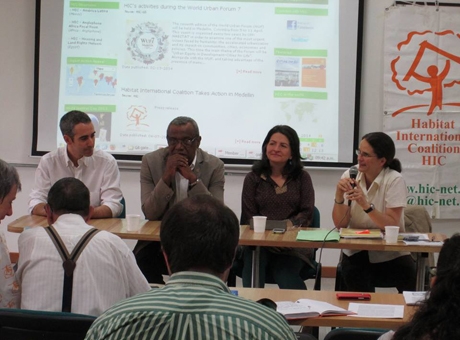 DPU staff also participated in the Foro Social Urbano Alternativo y Popular in some of the roundtables where communities, social groups and citizens coming from various part of Latin America were discussing urban issues around equity, participation and right to the city, in an alternative and progressive manner outside the glossy lenses and media attention of the official WUF forum. Alex Frediani was at the Habitat International Coalition (HIC) General Assembly, where a call was made for Habitat III to demonstrate move towards more ‘equitable, ethical and people-centered development planning’. You can read Alex’s post on the DPU Blog.

Elsewhere in Medellin: Prior to the WUF, members of the MSc BUDD organised a joint workshop and seminar with the Maestría de Estudios Urbano- Regionales of the Universidad Nacional de Colombia. The underlying principle for this joint initiative was the re-assessment of the complex relationship between design and politics that underpins the current debate within planning, architecture and urbanism. The need for recognising design discourses and practices for the (co) creation of knowledge in our current society, characterised by crisis, scarcity and hyperbolic urban transformations was discussed. A second important part of the discussion was how a transnational studio, as it is used in both the Master’s programmes, is a main learning setting. The challenges and opportunities if this pedagogical approach were discussed with lecturers, students and alumni who have had experience in these settings. 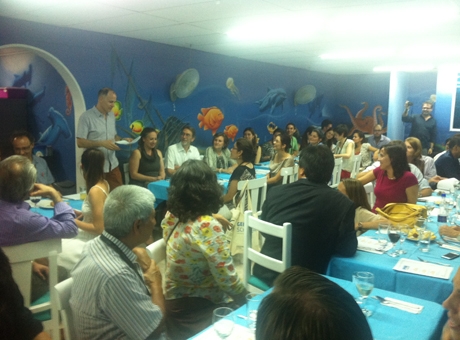 Leaving the hustle and bustle of the forum behind for a moment, we hosted a dinner for alumni, friends and former colleagues. We were proud to see over 50 familiar faces from countries far and wide, ranging from recent graduates, to other who had studied almost 4 decades ago.

As we reflect on 60 years of the DPU in 2014 it was marvellous to see so many alumni actively engaged in key conversations around urban development in Medellin. Our participation in WUF7 has marked another stop-off in our 60th Anniversary Activities. We now look ahead to our next event, Avoid, bury or improve? What to do with the MDGs post 2015 on 12 June, and our exciting Anniversary Conference, 2-4 July, for which registration is now open with early-bird discounts! We’ll be announcing more in the coming weeks. To stay up to date visit our website, follow and like us on Facebook and Twitter, and sign up to our email list.