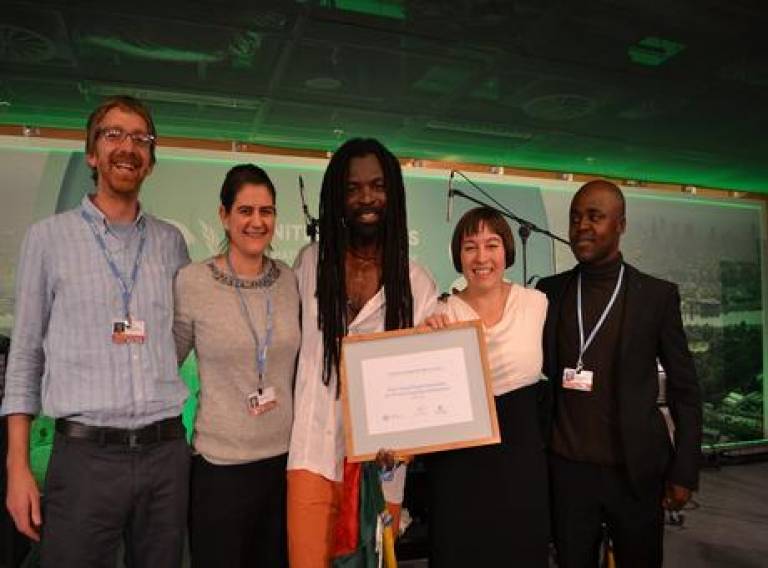 On Tuesday 20 November the Public Private People Partnership for Climate Compatible Development (4PCCD) received the prestigious UNFCCC Lighthouse Award for its initiative to deliver low-emission, climate-resilient development in Maputo, Mozambique. The award was made in Warsaw where the team are currently attending the COP 19 summit.

Formed in 2011, the 4PCCD involves the everyday citizens of this sprawling African city of 1.2 million in key decisions that affect their environment and wellbeing.  “If we are going to address climate change problems in Maputo, we need to understand what citizens need,” said Carlos Seventine from Mozambique’s Environment Fund (FUNAB).

The initiative brings Mr Seventine’s organisation into partnership with local government, private businesses, a local non-governmental organisation called AVSI, thousands of local residents, and development experts from the Universities of London, Reading and York in the United Kingdom. The initiative focuses on Chamanculo C, a neighbourhood blighted by solid waste and urban sanitation problems.  4PCCD has used a methodology called Participatory Action Plan Development to analyse the dynamics among different social groups and empower the most vulnerable residents to contribute to planning decisions. As a result, residents have generated a list of priority actions. These include rehabilitating drainage channels, improving waste collection and disposal, constructing sanitary blocks and repairing leaking water pipes. They have also discussed options for a composting plant that would enable them to deal with their waste in a more sustainable way. All of these plans for boosting urban quality of life, sanitation, and health also have benefits for the climate because improved waste management will reduce greenhouse gas emissions and help to store carbon in soils.

"The community have been the real climate change champions of this project. Every time I have been surprised by their commitment and enthusiasm. It is important for other actors in Maputo, from the local municipality to the Ministry of environment to understand how community action can help them achieve their objectives."

At first glance, 4PCCD’s plans and achievements appear to be very practical and straightforward. However, they came about through a carefully planned, consultative process. Vanesa Castan Broto, the project leader, said “A factor in urban resilience is citizens’ capacity to influence policies and processes at the district, national and international levels. When citizens, city institutions and businesses learn about their area’s environmental resources together, and pool resources to tackle environmental problems, they can increase their quality of life and also their resilience to climate change.”

According to the UNFCCC Secretariat, which runs the Momentum for Change programme and its annual Lighthouse Awards, “Momentum for Change provides a public platform to highlight broad-ranging climate change actions that are already achieving tangible results on the ground. By shining light on inspiring and transformational mitigation and adaptation activities, Momentum for Change aims to strengthen motivation, spur innovation and catalyse further change towards a low-emission, high resilient future.”

Sam Bickersteth, CDKN’s Chief Executive, said: “This well-deserved Lighthouse Award for the 4PCCD recognises that, in order for climate compatible development to have deep roots and the prospect of sustainability, such plans must be owned by communities and speak to their many development challenges, of which climate change is but one, critical facet.” The idea of the 4PCCD was hatched at the CDKN Action Lab in early 2011. The Lab that aimed to catalyse innovation for climate compatible development by bringing sustainability leaders together. CDKN provided start-up funding for the 4PCCD in 2011-13.

Domingos Augusto Macucule and Vanesa Castan Broto received their Lighthouse Award from Ghanaian singer and climate change activist Rocky Dawuni at a vibrant, upbeat awards ceremony in Warsaw’s Narodowy Stadium. Their award was feted by some 200+ delegates to the 19th Conference of the Parties (COP19) of the UNFCCC, who took a break from tense negotiations to applaud the 4PCCD and other winners. A complete list of this year’s winners is available on  the Momentum for Change website.