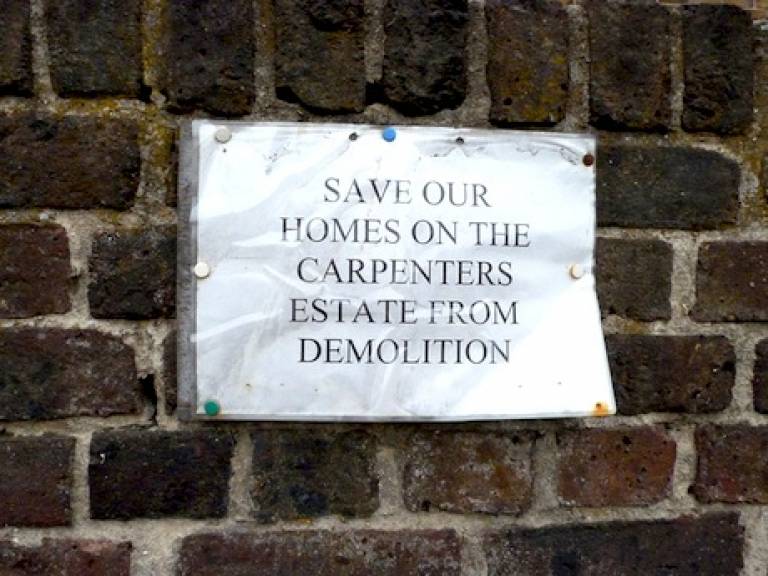 The MSc Social Development Practice Programme is pleased to announce the launch and publication of the student report: Regeneration and Well-Being in East London: Stories from Carpenters Estate.

This report is the product of three months of research undertaken by students in the MSc Social Development Practice (SDP) programme, as a part of the London-based field work of the SDP practice module. It follows the story of Carpenters Estate—a 23-acre council housing estate located with in Newham Borough—and the site of significant attention as the proposed location for a second campus of the University College London (UCL). This UCL initiative represents just one element in a wider set of regeneration processes taking place in East London in the wake of the 2012 London Olympic Games, raising both the profile and financial value of the area. While the regeneration process and UCL bid are underpinned by particular city visions, the motivation to undertake this research emerged out of the desire to better understand the impacts of this regeneration process on those people directly affected by the plans: the current residents themselves.

In collaboration with residents, independent actors and researchers involved in examining the social changes taking place within the Estate, this project explored the effects of the regeneration process in relation to three key dimensions of the Carpenters Estate residents’ well-being: secure livelihoods, dignified housing, and meaningful participation in the redevelopment pro­cess, using the analytical framework of the Capability Approach (Sen 1985). Focusing a chapter on each of these elements, this report illustrates that there remain serious questions regarding the intended and actual beneficiaries of the regeneration process, whether it is tak­ing place in an inclusive and equitable fashion, and how citizens can exercise democratic control over decision-making that affects their lives and urban space. In each of these three areas, the stories, histories, and evidence presented demonstrate a clear divide between the stated aims of Newham Council and UCL, and the impacts of the re­generation process on residents of Carpenters Estate. While this report does not attempt to generate a comprehensive or statistically representative evaluation, it does outline key inconsistencies, contradictions and issues that need to be taken into con­sideration when advancing the regeneration strategy of the area. It also provides a rich sense of the histories and stories emergent from the Estate that may be lost under the current regeneration plan.

Carpen­ters Estate represents a close-knit neighborhood within an increasingly individualized city, and this report demonstrates that far from recognizing and supporting the resilience of this community, the regeneration process has thus far detracted from the well-being of its residents on multiple levels. Newham Borough and planning authorities would benefit from re-conceptualizing neighborhoods such as Carpenter’s Estate, recognizing its value as a ‘living es­tate’, and recommitting to it as the type of community that London authorities and the Legacy process should strive to attain.