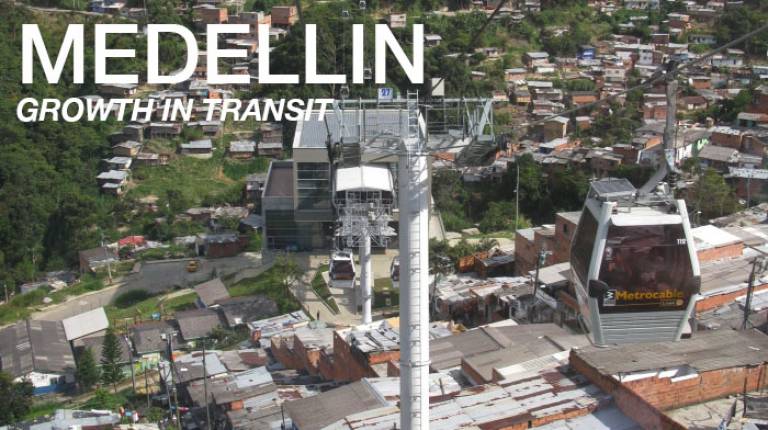 Over the last decade, Medellin has pioneered the upgrading of informal settlements through massive investment on high quality public amenities and connection to a robust transit system including the city’s new cable cars as well as outdoor escalators supporting the mobility of its most disconnected settlements.

These transformations have garnered the city much international recognition, leading to it recently being named by at least some authoritative worldview as the “most innovative city”.

However, challenges of growth management remain as some of the most salient for planning in the region. In this context, the current municipal administration is embracing a two-fold strategy of growth management, that of the re-densification of central areas and containment of border expansion.

While important strategies in and of themselves, these initiatives are not being considered in tandem in order to both understand and fruitfully model their interaction with the projected transit system.

Using these urban challenges as a profound critical platform, the Medellin summerLab seeked to investigate methods for linking growth management and public transit in a systemic way.

Focussing on the particularities of the new tramway, cable car lines and monorail located in central east zone (Comuna 8) that are under early stages of construction, the workshop has navigated along these infrastructures and through some of the communities they are impacting.

Guest inputs from academic experts, interactions with citizens in neighbourhoods and conversations with local authorities have served as a contextual basis for our explorations.

Through exercises including socio-spatial mapping and continual group debates we developed various scales of proposals and dialogues that could potentially ensure more sustainable links between city growth and innovative transit frameworks.

Participants experienced the field testing of new methodologies for urban practice that hinge on critical pathways for social, economic and environmental development set against an infrastructural milieu.

Further information is available in our DPU summerLab 2013 pamphlet