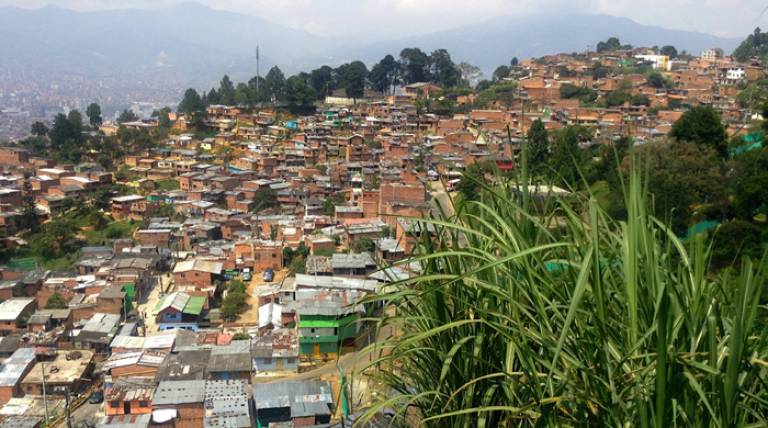 Medellin has been defined the “rising star” of the Latin American urbanism and received global attention for its social urbanism program; innovative urban projects aiming to re-integrate the city, enabling marginalised communities to be empowered and reconnected to the magical urban core.

Metrocable car systems and the provision of large cultural infrastructure projects, library parks and public space interventions have changed the face of the city and more specifically that of the impoverished slope communities.

However, we must question why Medellin remains the most inequitable city in Latin America despite huge public investments and high quality architecture in informal settlements.

The 2014 summerLab has looked – through a deconstruction of the notion of social urbanism’s discursive practices and an understanding of the aesthetics regimes of both government and grassroots – into the every day realities of a specific Communa on the slopes of Medellin.

It sought to understand the small grassroots interventions in Communa 8’s territory and to see how spaces are created and constructed as alternative and counter-hegemonic urban planning in contrast to the grand beautification gestures of the city. Thus, it has focused on the intersections of livelihoods and domestic space as an avoided substance in the social urbanism core tenets.

The convergence of a strategic location, recent public investment in community facilities, and a strong community organisation makes Communa 8 a unique city sector to engage in a deep transformation. Despite the urban-armed conflict, or because of it, a new political interest in Comuna 8 emerged in the last years focusing on mobility infrastructure.

Accessibility and connectivity are relevant issues in this hilly area, mostly urbanised through informal processes. However, both projects have been contested and sparkled discontent amongst inhabitants for ignoring pressing issues and community priorities.

Nonetheless, a strong community organisation has promoted social mobilisation to contend those projects and implement their own Local Development Plan. Therefore, the site has become a fertile scenario for unveiling the clashes and potentials between bottom up and top down planning initiatives at work.