19 - 24 September. In collaboration with: Stephen Kenny (The Baring Trust) 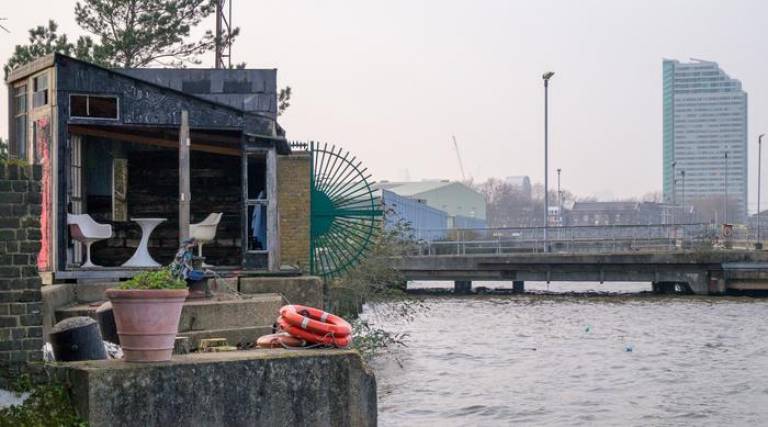 The London summerLab has focused on Convoys Wharf in Deptford, Lewisham. Buried beneath the Wharf lies the original site of John Evelyn’s once celebrated Sayes Court (and an inspiration for the founding of The National Trust). It was also the location of Charles II’s Lenox, a warship that was built there at the height of the site’s prominence as one of the most important Royal dockyards in the nation, which originally dates back to the reign of Henry VIII in 1500s.

The site now lies derelict, a wasteland waiting for an opportunity to revive it into a prominent riverside destination. In 2014 the go ahead was given to transform the site into a luxury mix-use residential and office development.

While its redevelopment is a welcomed opportunity, local residents and community groups have been fiercely fighting for an ‘opportunity’ that will benefit everyone. When development plans originally ignored the site’s rich industrial heritage, they fought endlessly to ensure that the area’s heritage value is fully instilled into the site’s regeneration plans.

Much has been achieved and participants of the summerLab have learned how the different community groups mobilised and succeeded in raising the profile of their community-led heritage projects. Their fight is far from over, and further work is needed to develop their ideas into concrete, viable plans that can be delivered as part of wider redevelopment scheme.

During the first day, participants have learned about the site’s rich history, explore the current development proposals and the complex layers of political visions as well as hear from inspiring community leaders (our partners) who have led change in the local area: Stephen Kenny of the Baring Trust; Julian Kingston from the ‘Build the Lenox’ project; Roo Angell from the Sayes Court project; and Andrea Hughes from the forum Deptford Neighbourhood Action (DNA).

The second day was involved a study tour of the site, undertaking a detailed urban analysis of its spatial context and its relationship and integration with nearby sites of strategic importance, such as the Maritime Greenwich UNESCO Heritage Centre. Along the way, participants have encountered further activists’ stories and different local narratives uncovering the dynamics of the neighbourhood as a whole.

This has provided rich layers of information that was then drawn on from the third day onwards, as participants work with the local partners to address the challenges and issues they face, helping them develop ideas, strategies and interventions that meet their objectives

Participants of the summerLab had a unique opportunity to gain practical experience in processes of urban analysis and design research, navigating the relevance of local narratives and sense-making in the context of urban renewal.

They have delved into processes of community participation gain a deeper understanding of the challenges and complexities involved in the development of contested urban spaces.

Along with our local partners, they have worked towards developing place-based strategies, rooted in principles of socio-spatial justice.

The workshop was also an opportunity to collaborate on a live project and develop tangible outputs around the themes and issues that the local communities are grappling with, under the supervision of leading researchers and practitioners from the DPU. The outputs included:

Design strategies have focused on how the several community groups might develop an inspiring engagement plan, with innovative approaches, props, tools and tactics to better engage with local residents, allowing them to achieve continuous and active participation in the urban environment.

Further information is available in our London programme PDF